The Games I Play


This week I decided to stay a little in the vein of last week’s post which was “Podcasts I Listen To”.  Only, this week I’ll be going over Games I Play and what they are about and a little general info about them.  I play a lot of games anymore, which is a vast change from earlier in my gaming life.  I mostly stuck in the Games Workshop catalog for an abundance of my life and just in the last four or five years with Age of Sigmar switched into playing a lot more titles from other companies.  I’m going to forgo card games, board games and RPG’s for this list and just stick with Miniature Games, particularly since that is the focus of the Podcast.

Age of Sigmar by Games Workshop
The first of Games Workshops games on the list.  Age of Sigmar to me is a loose formation, mass battle, fantasy game in 28-32mm.  That is to say that, models move as individuals not on a single movement tray like days of yore, and the game focuses on magic and combat.  The game is extremely combination focused whereas you try to build your armies using units to use their abilities to help boost the abilities of other units.

Blood Bowl by Games Workshop
This game is a combination between miniatures and a board game using 28-32mm models.  A very loose take on American football using fantasy teams it is very much a blood sport.  Sure, you can try to win the game fairly just by moving the ball around, but its far more entertaining (and common) to beat the other team’s players into bloody pulps before scoring that goal.  The best part of Blood Bowl is that you only need probably twenty models at most to give you some options and you’ll then be set forever.  At least, until you decide to buy another team.  I have four.  The game’s most entertaining part is that your team’s skill and level up gaining new abilities and traits to make them better giving you a real investment into your players.

Flames of War by Battlefront Miniatures
Flames is a lightly Historical World War II game.  This is an army game in 15mm which is pretty small on the miniature scale of things.  I say lightly because it is abstracted and not a historically accurate game.  If you’re looking for a real simulation this is not it.  It is however a very fun war game flavored in WWII.  If you ever played Battlefront 1942 for your gaming system then the chances are that you’ll really enjoy this game, few things are as satisfying as moving a bunch of Shermans around a corner and overrunning some enemy positions or sometimes putting the shell from a Tiger through pretty much anything.

Frostgrave published by Osprey Games
Frostgrave is a skirmish small team style game in the style of Mordheim or Necromunda from Games Workshop.  That is to say, you build a small gang basically that continually ventures into the ruins of an ancient frozen city to retrieve treasure and magical artifacts.  You level up and get new powers and skills.  Warlord Games does produce some models for this game, however what really drew us to the game was the miniature agnosticism of it.  This basically means that you can use whatever models you want from whatever miniature manufacturer you want.  This helped a lot as we have huge fantasy armies already at our disposal.  The game can be quite a swingy affair utilizing a D20 to determine the outcomes of attacks. 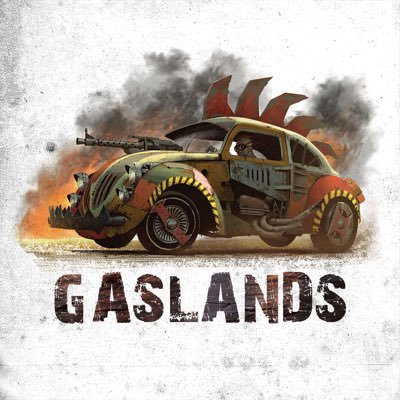 Gaslands published by Osprey Games
Gaslands is the most recent game we’ve picked up playing.  It is a small game which has no models for it made by any manufacturer at all.  It is however, designed to use Matchbox or Hot Wheels cars to drive around and murder each other.  Think of this game as a mix between Mad Max and Death Race.  It is a lot of fun and very beer & pretzels in terms of rules tightness.  You just kind of have to let loose when you play because the game just doesn’t take itself that seriously but it is a lot of fun.

Kings of War by Mantic Games
Kings is a 28mm army scale, massed ranks, fantasy battle game in line with the old versions of Warhammer Fantasy Battles.  It sets itself apart from Warhammer though by not only having a lot of different rules, but also in that there are a massive amount of army lists available.  It takes into account that Mantic doesn’t necessarily produce the models for everything and so while not necessarily miniature agnostic, it says in the book to basically find and use whatever models you like.  Magic isn’t as big of a player in this game as some other fantasy games though it does exist and the rules are very tight and good for a tournament style game. Warhammer 40,000 by Games Workshop
The final entry for Games Workshop, this is a classic in the gaming world for the last thirty or so years.  A mass army, loose formation war game in 28-32mm and it seems getting larger all the time.  A large quantity of available armies and amazing models this falls somewhere in the same realm of Age of Sigmar.  Use your units to buff your other units, and build a synergy to destroy your opponent.

Wild West Exodus by Wayland Games
Wild West Exodus was a weird west style game that uses the American westward expansion of the 1800’s and adds the twist to it that aliens and futuristic technology has become available.  This leads to everything from jet propulsion motorbikes to laser pistols and mechanized walker robots.  It is a small army skirmish game in 32mm using D10 instead of D6 as most of the other games I’ve listed do, and while Wayland does make the models still they are into an edition of the game (2nd) that we do not enjoy.  We still play 1st from time to time, so take that recommendation as you want.

Wings of Glory by Aeres Games
Wings is a World War I dogfighting game much in line with the Fantasy Flight production of Star Wars: X-Wing.  In line with X-Wing because Wings of Glory came first pioneering the mechanics of the games flight style.  The game is designed as a small dogfight game and I think excels at that task.  I would never want to play this at the size I see in some X-Wing Games.  The planes are obviously a bit abstracted but often take into account the historical accuracy of certain quarks that some airplanes had.  For instance, one plane might have better access to left turns while others which were known for being sluggish might be slower or unable to perform flips or barrel roll type maneuvers.  The game is not diced base and instead uses a card draw mechanic which makes it quite different from the rest of the offerings I’ve discussed.

If any of those sounds interesting I highly recommend giving them a look.  While Wild West Exodus 2nd edition doesn’t seem to have gathered traction with my group that doesn’t mean it won’t for you, and if you want the first edition rules let me know and I’ll be glad to get you a copy.  Also, If you have any questions regarding anything above just feel free to ask me through any of the normal contact channels.

Thanks for reading and happy gaming.
Blog