In plans for my future I purchased yet another Giant and this one is actually giant!  Mantic games recently finished their Kickstarter for Vanguard; a skirmish based fantasy battle game, and during that Kickstarter campaign they funded a Giant model.  Lucky me, that even though he won’t be available through standard channels until sometime next year they had some that had been produced for the campaign which I was able to get one from.

Today I’m going to go over the model and throw you out a bunch of pictures for comparisons and information.

You can see the individual pieces for the model below.  There are some mold lines but not too many and they are slight.  The detail is nice and crisp and the plastic is clean.  I still gave it a warm, soapy wash though. 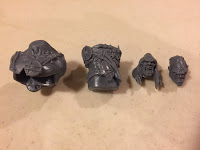 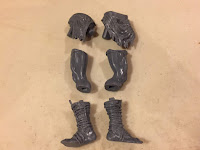 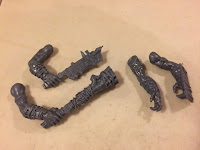 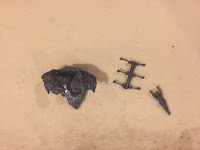 I could be wrong but I’m pretty sure this model is made of a plastic rather than the old resin that Mantic has used in the past.  That said, he was shipped from the UK and being bundled in a box for so long did result in some pieces being warped which after a quick boil got put right back into order.
Upon basic dry fitting, you can see where gaps will appear in the model.  Now you may be able to boil and push the model together to correct some of these gaps but I just green stuffed the gaps myself because I’m dumb and super impatient.  Also, while you can see the gap here with the shields that is the giant’s backside, his front side line fit quite snugly where it was supposed to be. 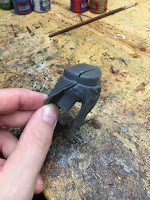 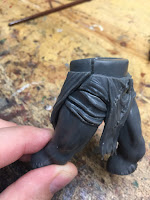 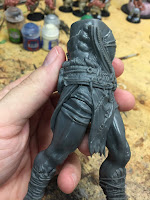 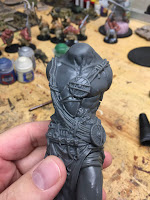 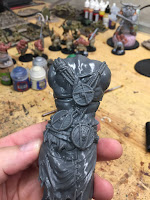 Being completely assembled I wanted to stand him next to some of the other giants I own so I grabbed the two tallest I have.  The Forgeworld Bonegrinder Giant and the Games Workshop Aleguzzler Gargant.  You can see from the pictures below that the Mantic Giant stands between the two.  The Bonegrinder measures at a grand 8 ½ inches tall and the Aleguzzler is 4 ½ inches.  The Mantic stands at 7 ¼ inches between the two making him the second tallest model I now own and a truly fearsome model to put on the table which means in future games I’ll 100% be using two Bonegrinders in my Ogre armies for Age of Sigmar.  What fun!  Thanks for checking out the model and I can’t wait to paint him up. 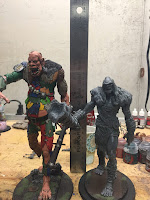 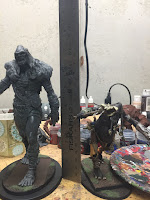 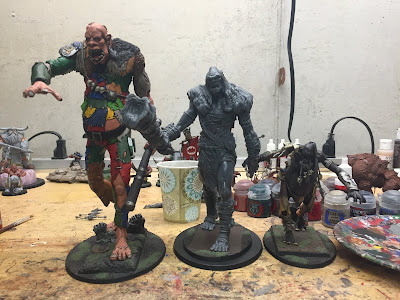