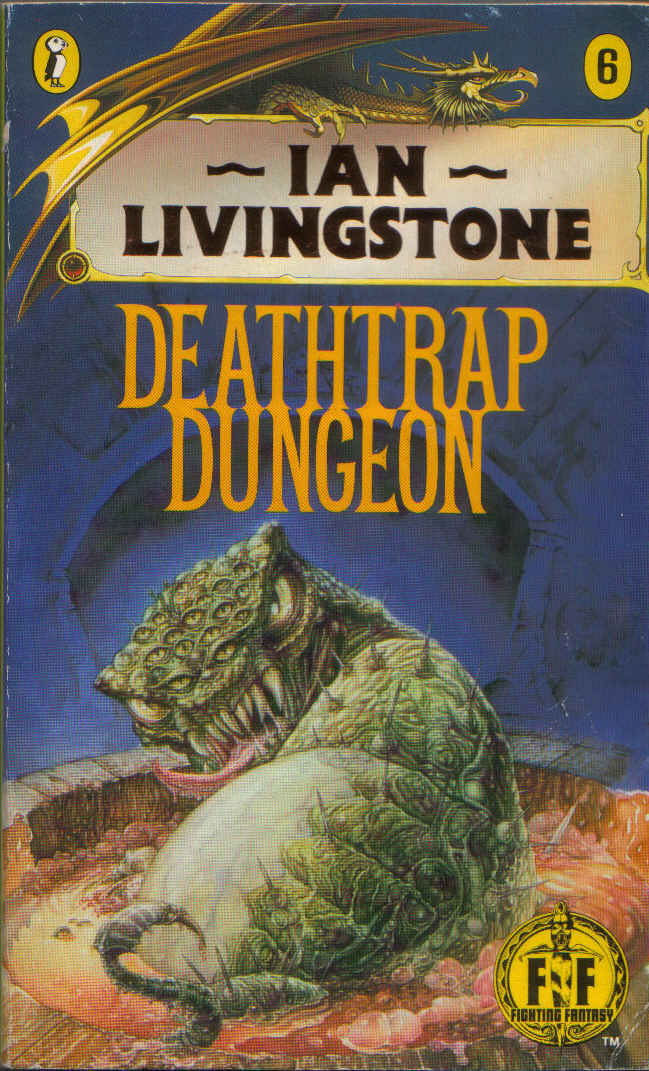 When we left I’d entered the dungeon seeking the glorious prize for surviving to the end.  I’ve encountered many traps and enemies.  Freed a prisoner who told me the secret to victory, discovered some fancy gems and currently am uneasily allied with one of my competitors.  Currently we’re heading north after having discovered it hidden at the bottom of a pit that had blocked our way.
While heading north we found on the wall a small shelf holding two dusty old books, one red, one black.  Throm the barbarian scoots away, his distaste of the written word and the unknown clear.  I open the black book and it crumbles from age.  What I manage to get out of it is a few papers detailing the weakness of the Bloodbeast.  The other book is a false book containing a small vial which I take my chances on and drink which works out as I gain +2 luck.  We move on north.  Eventually the tunnel curves east and Throm stops me.  He hears footsteps approach and we hide in the shadows.  Two cave trolls come down the hall and we surprise them.  We come out victorious though I took a good lashing or two.  One of the trolls had a ring on a piece of leather around his neck.  Throm says he recognizes the symbols on it and would recommend leaving it where it is and refuses to touch it.  If my competitor says its evil and won’t take it I’ll accept his word, we move on east. 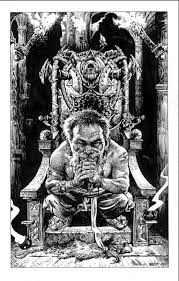 We eventually reach a larger cavern with stalactites and mites everywhere.  We decide to search around in case there is something here we’ll need.  Throm finds a leather pouch and as he picks it up, a mouse scurries out of it which makes him laugh.  The echo brings many stalactites crashing down from the ceiling and we must run for our lives to the exit on the other side of the room.  We make it out unscathed and he apologists for his indiscretion which I accept and we move on.  Finally, we come to a large wooden door.  We enter and inside is a room with no clear exit other than the one we came in through and a dwarf siting in a large stone chair.  He says that he is a Trialmaster and that there can only be one winner of the challenge and he must now test us to see which one of us can move on.  Clearly, I’ve been warned of the Trialmasters and Throm doesn’t trust him either as he whispers to me that we should attack.  We both rush at him, but the dwarf is quicker than he looks.  He leaps from his chair and throws a dart at both of us which paralyzes us.  Afterwards he asks if we’re ready for his tests now which we must begrudgingly accept.  He takes me to a different room through a secret door.

He rolls two dice and gets an 8.  Then asks me to roll them but to first guess whether my number will be lower or higher.  I stick with averages and say lower which happens to be correct when I roll the dice.  He then dumps a deadly cobra out of a basket onto the ground and says I must test my reflexes and grab the snake under its head.  I reach out but the cobra is faster and strikes.  Luckily it hits my leather wrist guards rather than me.  I try again, successfully this time.  I put the snake back in the basket and the Trialmaster leads me back to the room with Throm.  We then exit through another secret door where I’m told to wait.  I am in a small arena with a sandy floor and a balcony above.  The dwarf eventually appears on the balcony and drops two pieces of paper down.  Unscramble the words and choose one of the beasts to fight.  The papers read: No Crop Is and Ruin Moat.  Easily deciphered as Scorpion and Minotaur.  I’m sure the scorpion isn’t going to be the garden variety but you never know so I choose it.

A massive black scorpion is released from behind an arena door.  Dammit…  I quickly wish I’d chosen minotaur as I have to not only fight a claw, but meanwhile fend of the other and if the scorpion ever rolls double 6’s turn to a different page.  My assumption is that if this occurs I probably get the stinger which I can’t imagine ends well.  After burning through a significant amount of my luck for extra damage I manage to defeat the scorpion.  Beaten and bloodied the dwarf congratulates me.  He drops down a bag with a chicken and some wine and bids me rest and await his return as he leaves.  I have no real choice and the food is a good repast, along with some of my own provisions I’m nearly full on health again and now I sit and wait.

Sometime later the dwarf finally returned and claims to have a bit of a problem.  Meet your next challenge he says as the door opens to reveal the barbarian.  The cobra bit him says the dwarf but he is a tough one.  I curse at the outcome here but have no choice.  My luck is low and not worth wasting on this as it will likely fail so it is up to the dice.  Throm is 1 point higher in skill than myself but I’m starting the fight with 7 more hit points than him and it turns out this is what carries me through to victory.  I’m down to 11 by the end of the fight but I do survive.  The dwarf trains a crossbow on me and congratulates me while also telling me that while I might like to kill him it isn’t worth the attempt.  He’s already proven himself as a capable opponent and he’s got the drop on me with the crossbow so I continue through a doorway to the north that he opens for me before wishing me luck.

I move north and come to a west passage way from which there is a loud buzzing noise.  It reminds me of the large fly I managed o avoid earlier so I pass it and continue north.  I eat 2 more of my rations here to replenish some health before moving on.  I find a dark room filled with cobwebs and in the dimness trip over a wooden coffin.  Seems like I have no choice so I open it and find inside a small velvet bag containing a shiny pearl.  I move the rest of the way across the room to find two doors.  I choose the right one and exit into a hallway.  I come to two cherub fountains, one on each side of the hallway spilling cool water into small basins.  I can drink the refreshing water, but one is clearly a bad result.  Odds left, evens right, I roll a 5 and get lucky.  It is refreshing and I gain 2 skill and 1 hit point back.  Continuing northward I come across a pair of stilts chained to the wall with a padlock and a sign.  For stilts, insert 1 gold into the lock.  Considering the box at the beginning of the dungeon gave me the only 2 gold, I have I assume these will be needed so I do as instructed, taking the stilts with me.

Still going north, I come to a section of the hallway filled with green ooze covering the floor.  Dipping some cloth in I find that the ooze is acid.  I use the stilts to cross the pool sinking ever further into the ooze as the stilts dissolve.  I reach the other side but the stilts are now useless so I leave them and continue north.  Soon I reach a door on the west side of the hallway which I open.  Inside is a dead knight on the floor with a large diamond nearby.  The potion I drank from the false book earlier was a potion of trap sense and it warns me off the room so I pass on.  At the end of the hall I find a wooden chute or slide.  Seeing no other option I slide down into a large cavern filled with bubbling slime pools and the dreaded Bloodbeast! 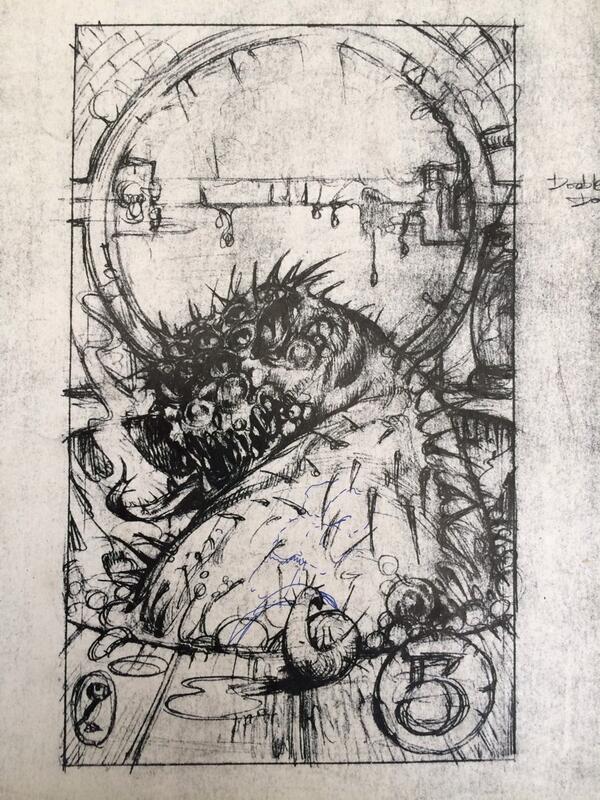 Remembering what I’ve learned earlier in the dungeon I know its true weakness and after a few rounds of combat I strike at one of its true eyes.  It reels back in pain writhing in the pool and I run past it to the exit of the cavern.  The next room I face a Manticore.  Again, given the information from the skeleton earlier I know my defense here and can avoid its deadly spikes.

The fight is long but I am victorious.  Past the manticore is a large stone door; the real exit!  There is a gnome here who says he is another trialmaster and congratulates me on making it to the end.  To open the door, he says though, I must use 3 gems on the locking mechanism.  An emerald, a sapphire and a diamond!  No!  I don’t have a diamond, and in fact the only diamond I saw was in a trapped room that I was forced to skip!  This just isn’t fair.  He apologizes as he informs me that I am now part of the maze, to work and modify the maze for future contestants.  My adventure has come to an end.
Blog Fighting Fantasy