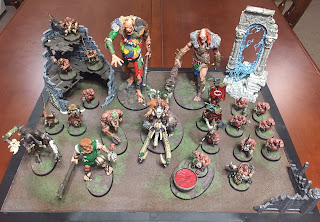 The Behemoth Bash tournament put on by my friend Chuck has come and gone and a good time was indeed had.  A tournament designed for me (not really), but definitely fitting the bill for where I’m at in so much as my current headspace for the game.  Big silly monsters fighting certainly seemed like a good way to waste my day and so off I go.  You can see my last post regarding my list here.

This game could’ve gone either way frankly, particularly with the brutal silly amount of damage the Evocators can put out, especially combined with the just ridiculous comet spouting power of the Stardrake.  Lucky me, young Charles is inexperienced and played the Dragon poorly for the first part of the game.  That and his comet bombardment that it provides only ever hit 1 unit a turn keeping its mortal wounding spam from affecting me too much.  My Tyrant missile hit the Evocators killing 5 and then he lost 2 more to battleshock which without a doubt also helped me survive.  In the end I was able to kill the drake after a couple rounds though it inflicted serious damage.  I ended up with a solid win here.

Kevin went straight Destruction and grabbed all the best beasts he had at his disposal.  The game went back and forth quite a bit but Kevin ended up with the major win here and I think it is due mostly to the fact that the Rogue Idol and Stonehorn were reducing all my wounds by ½ from their special abilities.  I got plenty of attacks in but the damage reduction kept him alive longer than me and I suffered a grand defeat.

This game was super back and forth.  Ethan got the engine ability off that doubled his movement and attacks in round 1 and we both thought the game was basically over right here but with some chuffed rolls it wasn’t.  All our monsters met on the left side of the table in what can only be escribed as an orgy of destruction.  My giants managed to take down the Carnosaur and the Cavalry while the Frostlord, Tyrant and Ogors slowly plodded their way through the rest of the army.  There was some serious luck for me here too as his Salamanders never once managed to wound anything and those boys can put out the hurt on the mortal wound front.  I managed to use the Frostlords snowball to kill off the Slaan but not before he had summoned a unit of 3 Ripperdactyls.  In the end, these are what gave him the win.  I’m not sure how many points those are but it certainly reinforced why I hate summoning as a mechanic.  I had to work pretty hard to get ahead on the game only to have it snatched away because of summoning that I have no way of preventing other than getting lucky and killing the Slaan earlier in the game. 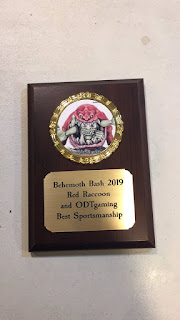 So, 1 win and 2 major losses.  All said though I had a really good time which is great because the Giant list is just so much silly fun to play and it was great to see everyone else bring out their silly monsters too.  I hadn’t hoped to win the tournament by any stretch but I figured on maybe best appearance since my army was actually based together and made to match whereas most people’s monsters came from random other armies they owned.  However, I ended up losing out on appearance to a Daughters army but that’s okay because I managed to get Best Sports.  Apparently, Kevin and Ethan felt that our back and forth games were worth enough for a kudos, so I did get to walk away with a nice little plaque and some store credit.  An excellent day of gaming.
AoS Blog