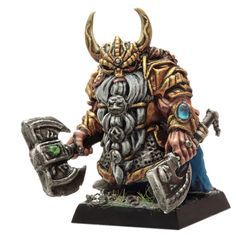 So this week I got my first real game with my Dispossessed and a lot of mistakes were made.  Let's start out with the lists.

We ended up playing The Better Part of Valour which we all know is a pretty interesting scenario.  The concept of being able to burn the objectives for points encourages you to hold them as long as you can, but you also really need to get across the board and destroy the opponents to really ensure victory.  With a couple of Sylvaneth Wildwoods on the board along with quite a bit of extra terrian my first mistake was deployment.  I divested quite a bit across the 3 objectives in my half of the table.  10 Warriors and 10 Drakes on the one to my left, 20 Longbeards on the middle objective and everything else hugging the third on the right.

Across from my left was his Wildwoods between the woods my objective was in and a hill with his objective and Revenants and Alarielle.  Across from my Longbeards who were standing on a hill is a building mostly in the middle and Ythari's guard.  Across my right was a hill before getting near their objective guarded by the Treelord and Revenants.  The rest of his army was off the table.  He got choice and let me go first which is smart since I can't get into range on turn 1.  I used the Pickaxe and teleported the Irondrakes off which was my first mistake.  I should've just kept them back as a threat to Alarielle and saved the pickaxe for later use.  The Ironbreakers started their length march across the table.  The mistake let Alarielle run straight at my small units on my left objective where she tore the Drakes to shreds.  Also on his turn 1 he used her ability to drop the Hunters with Bows who began shooting my Longbeards in the open and with a good volley and bad battleshock I basically lost 1/2 the unit.

On turn 2 he got to go first and Alarielle ate 1/2 the unit of Warriors on that objective and he again blasted off more Longbeards.  His Revenants on my right just moved forward and stood their ground.  Sadly at the end of this turn my Warriors who were left against Alarielle disappeared from battleshock which gave her that objective which he then promptly burned.  My turn 2 my Longbeards began to move away from their center objective toward my other unit of Warriors who were sitting on my right.  The Irondrakes popped up and blasted Alarielle in the face and off the table.  This was mistake number two in my mind.  I really should've used them to drop into his backfield and threaten his objectives but I was afraid Alarielle might at this point be able to rage across my backfield doing the same.  My Prime came down (in the wrong place) antoher mistake.  He should've come down on the opposite side of his Revenants to my left but I was afraid the Drakes might not kill Alarielle and wanted him there to finish the job if need be.  If I'd come down behind the Revenants I could've potentially taken that objective from him.  I burned my middle objective this turn as well as his Bow Hunters were coming out of the woods toward me and Ythari's Guard were approaching from behind the house in the middle with Ythari.  My Breakers took off his Revenants to my right.

Turn 3 again went to him which was really hurting.  Seeing his right (my left) as a loss he burned his objective and sent everything their toward the Prime slapping him silly but leaving him alive.  I took off the rest of his Revenants this turn leaving his Treelord defending his leftmost objective so he also burned it.  He dropped his Dryads on board who because of placement ended up in range of my Irondrakes who torched more than 1/2 of them off.

Turn 4 as the Prime died we analyzed the board.  2 objectives left both of which we could tell we would retain control of until the end of the game.  At full burn points that put him up 13-10 on me and we played out the turn for fun, me losing my Prime and he losing his Dryads and his Treelord being left with 2 wounds before calling it.  In the end I definitely made mistakes.  Mostly in deployment and movement/teleportations.  Even then, if the small unit of Warriors on my left had survived which with Dispossessed is a 50/50 chance I could've burned that objective myeslf on Turn 2 which would've actually pulled the game into a draw at 12/12.  A disappointing end really, but heartening in that the list mostly functioned as I'd assumed it would.  Now to learn from my mistakes and push on.
AoS Blog