So along with last weeks YouTube video I thought I’d cover my terrain that I build for the scenario that Jim and I played.  One of the appealing things about Flames of War is that it is in general a thing that happened.  Sure, the stories on the tabletop are amazing sometimes, but naturally the game lends itself to wanting to recreate events that really occurred and as such even Battlefront realizes this.  Now, in Version 4 they haven’t done much in the way for campaigns or narrative releases, but in Version 3 they certainly did and it didn’t take me very long to dig up the Normandy Invasions book. 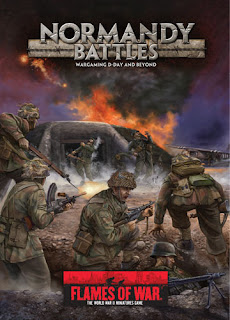 I was immediately drawn to the scenarios within and very excited to get one onto my tabletop.  I flipped through them all and settled on Scenario 1 of the book which is Omaha Beach, specifically because it required the least amount of scenery that I knew I’d have to be creating and looking at the list of required terrain I would need the following:


There were plenty of things on this list that I simply purchased.  Either because I was able to find them on sale, or I simply felt that the store-bought would look awesome enough to justify its cost.  From the Gale Force 9 terrain I purchased the Trench Line, Church, Minefields and Turreted Bunker.  Considering we’re playing using V4 rules I felt that the Minefields from Version 3 would be more applicable to the way this tables terrain was laid out plus I didn’t feel like using simple tokens or hand making what would probably have been 6 independent pieces so we can chock that up to just being lazy.  The AT and MG Nests I decided just to use the fancy Gale Force 9 Dug-In markers because they looked awesome and were cheap enough.  Plus, again, they look awesome and I use them in my games anyway.  The rest however I got creative with.
KWK Bunker & MG Nests 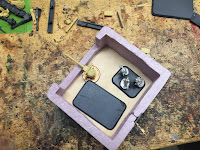 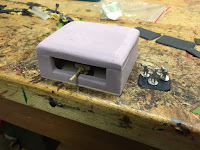 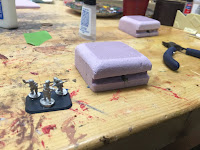 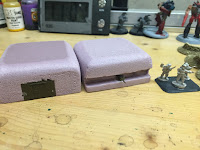 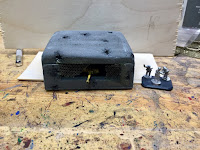 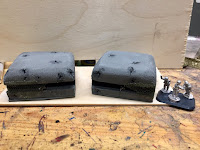 These are things that GF9 makes, however again, are rather pricey for what they are.  I mean, it is just not very difficult to create a bunker or nest of some kind out of pink insulation foam and that’s what I did here.  Simply cutting squares of foam and then rounding the top edges worked just fine.  Some jabbing with my hobby knife created some nice little pock marks as though from gunfire or air raids.  Using spare tank turrets/sprue pieces and transport machine guns I was easily able to create the guns that would sit in the fortifications.  I even cut some mosquito netting for camo nets to hang across the bunkers. 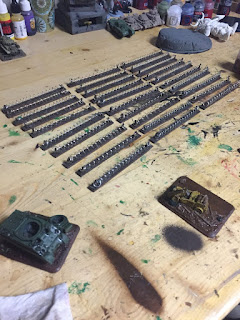 For this I took popsicle sticks which I have aplenty and cut the ends off flat.  Drilled a hole at each end and broke a toothpick off inside gluing it for security.  After flocking the stands, I primed and gave them a rough drybrush to bring up texture.  Finally, I wound jewelers wire around a pen and simply glued the wire to the toothpicks and popsicle sticks creating 4” sections of barbed wire.  Sure, GF9 makes some nice barbed wire, but their terrain is a little pricy and I needed a lot of barbed wire. 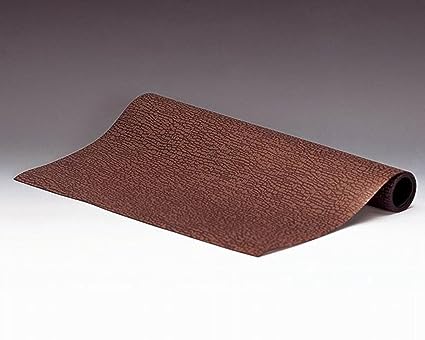 The roadway I’ve had for quite a while, but it was maybe the best/cheapest solution ever.  Finding this vinyl mat that is usually sold in places like Hobby Lobby, Michaels, Joann Fabrics, etc… during the holidays to put your little Christmas villages on I simply cut it into long strips.  Well worth the money. 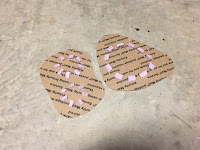 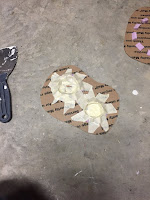 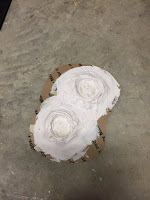 These pictures aren’t of me building the actual piece but it was the same method that I used.  Simply triangles of scrap Styrofoam cut and pasted on to some cardboard and then covered with wood filler.  I should’ve flocked it with sand but laziness got to me again on this one and so my crater is just painted.  There are some very nice commercial crater terrain pieces available and I've been eyeing a few more so because making craters is just time consuming. 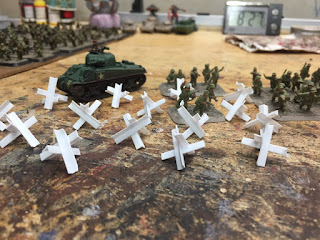 Stopping by the local hobby train store I picked up a bunch of Angle-L plasticard strips from Envirogreen at 4mm for only a couple dollars.  Some simple cutting and gluing them together resulted in plenty of Czech Hedgehogs and a spray of silver and a Minwax dip saw those to quick completion. 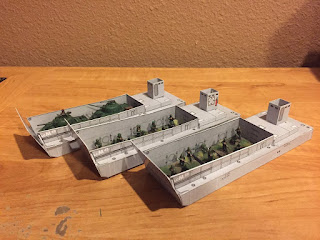 I’m not going to lie here, these are awesome and they are papercraft.  I’m also not so awesome as to say that I came up with this pattern, but I purchased it from https://www.paperterrain.com/landing-craft/lcm-landing-craft-mechanized.  These are totally worth it.  I ordered the boats in 20mm scale because they would mostly fit individual stands and would definitely fit a vehicle or two.  The real motivation though is that I bought five of these for roughly $15 shipped whereas 3 of the troop carriers from Battlefront would’ve been closer to $65 after shipping. 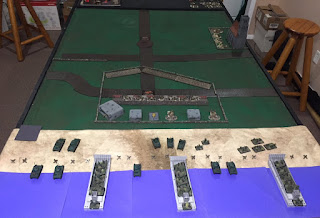 The only thing missing here is those two large back areas are flooded fields.  Doesn't seem like trying to make a 2' x 3' piece of water makes sense so I didn't. Also on the back right is a church which I purchased from GF9 because the churches they have available are just stunningly good pieces.

Jim and I had a ton of fun playing this scenario and I think ideally this is the kind of table I’d like to recreate as an actual table rather than an amalgamation of random terrains.  I think it would look really cool, and I’ve seen some amazing looking beach assault tables through Google for the game.  Things I aspire to, but will likely never compare.  Still, this should stand as a point that running a cool beach invasion is not beyond everyone’s reach.  Hopefully the post and video inspire you to go play.
Just in case you haven’t seen the battle report yet, or if you want to check it out I linked it below.

Also, embedded it for fun.