One of the many things that keeps players from getting more game sin is the inability to get to the local FLGS (Friendly Local Game Store) to play because they don’t have the tables or terrain at home.  Sure, you could throw a piece of cloth over the kitchen table, but it’s not the same.  This month we’re going to build a couple simple table toppers that you can use in your home to play your games.  This first one is a lot more basic and simpler to build which also equates to cheaper and easier to maybe lay against a wall or move somewhere that isn’t in your way.  The second which will be later this month is larger, more expensive but nicer to look at.  I have both myself, so it’s up to you to examine your gaming area and space, but enough chatter, let’s get to the plans.

Using 1 screw, join the boards together as pictured below where the boards meet. 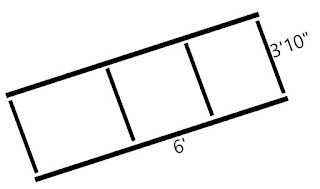 Cut 2 feet off the 8’x4’ sheet of plywood making it into a 4’x6’ sheet.
Place the sheet on top of the frame you constructed.  Using the tack and chalk line mark your middle crossbars that you can no longer see.  Using screws fasten it at the points indicated below. 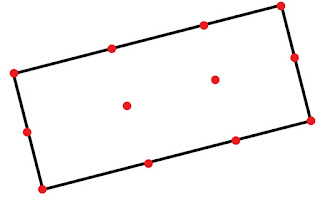 That’s all there is to it.  A very basic table topper that you can place onto any table and cover with what you like.  You could paint it, or what I did was purchase a 6’x4’ piece of green felt which sticks well to the unfinished plywood on its own.  The table itself is pretty thin when placed on its side (2-1/2”) and can be leaned against a wall, maybe placed behind a couch.  Hopefully these plans are useful to some of you readers out there and later this month we’ll be building a bigger topper, so keep an eye out on that.

Below are a couple of pictures.  One of the under side of the table.  I attached a spare piece of 1x2 in the center although I don't think it really adds any extra support of significance I had it lying about and thought maybe it would. 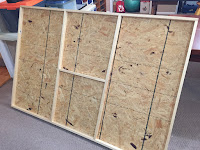 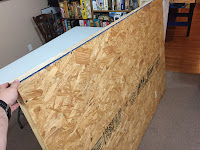