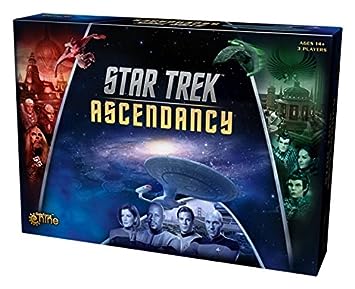 Note: This is not going to be a full-on review of every mechanic, but my thoughts on the game.
Credit where credit is due and that is to Dave from Garagehammer.  His praise of the game is what finally pushed me over the edge to purchase.  Well, that and the Miniature Market sale where it was over 50% off on sale making the game only $45 instead of $90/100.

The game is billed sort of as a quicker paced 4 EX game which in the board game community defines a game that is an empire building game which uses the 4 EX’s of doing that.  Explore, Expand, Exploit and Exterminate.  The base game comes with 3 empires from the Star Trek universe, those being the Klingons, Romulans and of course the Federation.  The pieces are impressive and the overall quality of the game and pieces is top notch.  The game is published by Gale Force 9 and it is in print which means available for purchase.  The rulebooks are all available for download on their website.

The game is an interesting take on board gaming as the map is created while you play so the gameboard is essentially (assuming you do what the rulebook says) a 3x3 foot space.  You draw the planets from a deck as your little ships explore the galaxy discovering new planets, civilizations and phenomena.  You colonize new planets or take control of them via diplomacy and construct facilities to increase your production of resources.  You use these resources to build more ships, research more technology, take over more planets or buy Ascendancy tokens.  If you have five tokens at the end of a turn you win and if there is a tie, the tie-breaker is the player who controls the most planets.

The game can be lengthy, but I’ve found them to be quick when compared to other much more structured or complicated 4 EX games like Twilight Imperium which means I like it more as it doesn’t take an entire day to complete.  Each of the races plays quite differently.  The Federation can expand quite quickly via its diplomacy while the Klingons are more centered on combat and the Romulans tend to rely on their more advanced technology on securing their way to victory.  As of this writing I’ve played probably 9/10 games and each race has won roughly an equal number of times with the Federation pulling out just ahead I think of the Romulans and Klingons.

Each planet you explore has a random card drawn with it to trigger an event and if the Federation bumbles their way into many Warp-Capable civilizations with resource structures already on the planets they can rocket ahead quite quickly, while on the same token a bad draw for any player on the planetary exploration can nearly ruin them.  This situation can lead to a runaway leader which will then require the other two players to essentially ally to knock that runaway person down a peg or to draw them back into the game but this doesn’t always work.

Another part that will drive some players crazy is that your technology deck is random draw as well which means that you may never see that tasty tech you really want (assuming you know what all your tech cards are) and if that was what you really wanted to concentrate on it can make you feel a little bitter.

The game already has a couple of expansions out.  The Cardasians who are another very war-like race and the Ferengi who produce lots of resources and use the money to buy their way to Ascendency instead of the normal way.  Finally, there is an expansion for the Borg.  This one differs entirely from the others in that the Borg is an AI threat that all the players must deal with or avoid while attempting to win.  They are very difficult to kill and if you let them get out of hand early they will become extremely difficult if not impossible to stop and if they ever managed to take over 6 planets all players lose the game.  If they manage to take over a players home planet then that player is now part of the Borg and while they don’t actively play as the Borg they get to assist them by picking one of two actions every turn which is a big deal towards steering them to galactic domination.

I’ve found the game to be a lot of fun.  My oldest son who doesn’t really care anything about Star Trek has really enjoyed it as well because of the immersive and interesting buildup.  It’s fun to construct an empire and watch it go to war with others and even if you think you’re going to do one thing, drawing your technology randomly may see your taking a race down a different path from their obvious goals.  Being a Star Trek fan, I feel the Trek in this.  The races feel a lot like they should and the technology reinforces that.  The events are just as wild and off the wall as in the TV shows and definitely pulls you into the genre if your even mildly aware of the shows.
In short, I really like it and recommend it highly, so I hope if Star Trek or empire building board games are your thing then you should check it out.
Blog