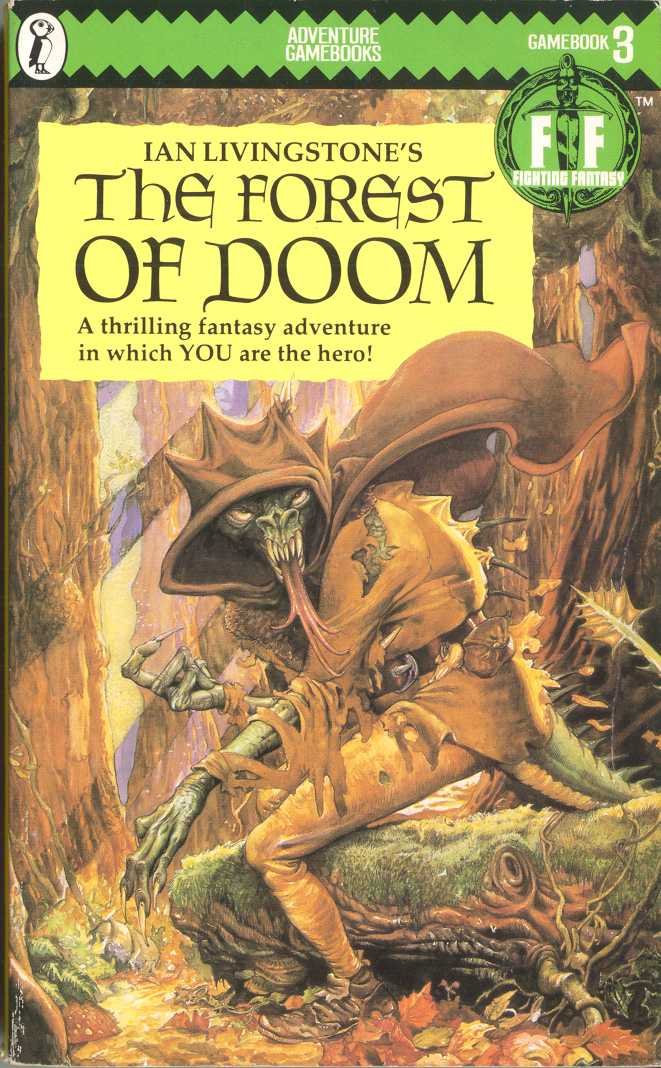 When we last left our hero he had taken on a quest to find the Stonebridge Hammer and save a Dwarf village from certain doom.  After purchasing some magical supplies, I went into the forest where I saved a robber, who unsurprisingly robbed me.  Killed a shapeshifting Lizardman, then a wild boar.  I arm wrestled a forester and killed both a fish monster and a werewolf.  I fell down a pit, pulled a magic sword from a stone and eventually took a break on a hill in the middle of the forest before getting to where we’re at now.

Given my current vantage I can see the Dwarf town.  I could go west but I’ve been skirting the edge of the forest for a while now and I’m afraid I may never find the hammer this way so I go east.  I continue east for a little while passing south branches on the path until I reach a north/south T.  I go north and encounter an old friar searching for a lost bronze bell.  I have no bell and he asks if I have any donations for the godly cause but I’ve sadly been robbed of my gold. He says something about there being no charity left in the world and makes his way off.  I reach another junction and head wets again passing more south branches and eventually turning north.  Some ways down that path I see to my left a small stone hut covered in ivy and moss.  The doorway is solid stone but has a keyhole for a key which I do not possess.  I do however possess demi-god like strength and I kick the door in.  I make my way into a crypt where there is a sarcophagus and a skeleton of either an orc or a goblin.

Unable to lift the stone lid by force I use the Dust of Levitation I obtained from the arm wrestling match.  Inside is a corpse who comes to life, however more of my artifacts coming into use I douse it with holy water.  It burns and crawls away to a corner away from me.  I look in the sarcophagus to find (much to my joy) 25 gold pieces and the bronze hammerhead!  I’ve found one of the two pieces of the hammer.  Now I just need to find the handle.  (Hopefully at some point I’ll round my way through this forest.  I would hate to end this story on the same note as the Firetop Mountain one having not thoroughly searched every possible option.)  I exit the crypt and continue up the northward path (because I apparently cannot choose another direction).

The path eventually turns east back into the forest before eventually turning north again.  As I travel down this path I find an area off to the east full of trampled bushes, broken trees and branches and in the piles of detritus I see some rags and shiny things.  I approach and as I’m searching the area I hear a loud whooshing of wings only to look up and see a Wyvern flying at me.  I engage the beast in combat and after a long hard fight come out victorious.  Searching his apparent treasure stash I find a steel gauntlet and a gold ring and some gold coins.  I put on the gauntlet to discover it makes me more skillful in combat, then the ring to discover it is cursed which makes me worse in combat; one step forward, two steps back, ouch.  I take my leave and head north where I am after some time traveling accosted by a group of road bandits.  Five of them to be exact who demand a toll of five treasures.  No way am I giving up five treasures and so the fight is on.  They present little challenge to a seasoned veteran such as myself and I defeat them finding some extra gold pieces.

Heading north from here I exit the forest into a plowed field where I cross a stone bridge and find the Dwarf town awaiting me.  While I’ve found a piece of the ancestral weapon I lack the handle.  (I’m certain I’ve failed in my quest but apparently this book is more forgiving and gives the option that if you wish to make a second trip to complete your quest you may, so naturally I do!)  I turn back and though I must go all the way back around the forest to the Wizards tower to restart my journey and search for the missing piece it is a small price to pay to successful finish my quest.  On my way around the forest I am waylaid by the bandits whom I assume are responsible for the Dwarf parties demise at the beginning of my quest.  I luckily escape them and do not get pin cushioned full of arrows.

After some time, I reach the tower and begin my quest anew turning east this time when I reach the forest path.  I meat a crow on a post who speaks to me and offers advice for 1 gold which I pay.  He tells me to go north and when I inquire about his need for gold he says that if he obtains 30 gold he will eventually have the wizard turn him back into a man.  I leave the bird.  I find some hobgoblins ahead whom I dispatch easily.  I also find a stingwyrm who I dispatch a little less easily.  Soon after I discover an ogre cave in which he appears to be tormenting a caged goblin.  Oh, it’s on.  I take some hits myself but kill the ogre.  Upon closer examination, the goblin has an ebony stick hanging from a necklace.  I kill it and retrieve what turns out to be the second piece of the hammer.  Now I must make my way back through the forest to the other side which shouldn’t be a problem if I can find my old trail. 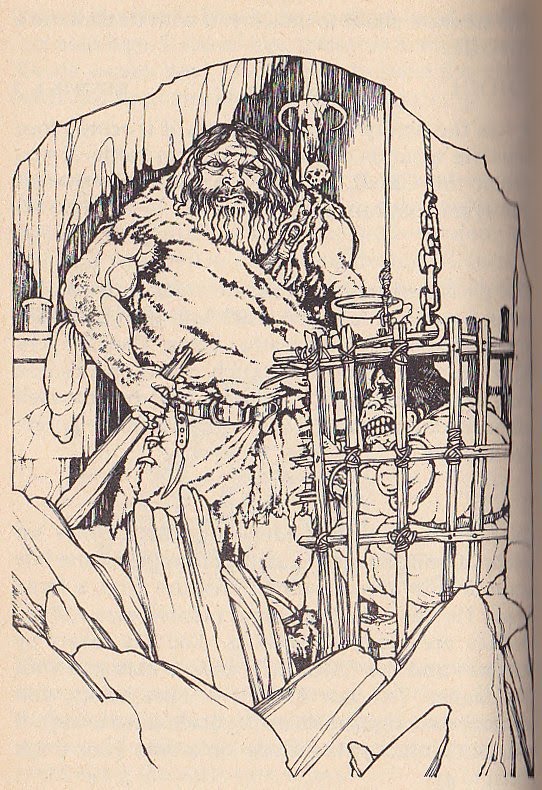 I head north and am caught in a hunter’s snare, luckily, I am able to free myself.  I discover a large treehouse which I choose to ignore.  Quest complete in my eyes, why tempt fate.  I continue north an eventually reach an open field, much like the one where I previously found a wild boar.  Indeed, this time I bear witness to a hunter chasing a fox but again not tempting fate I simply hide and wait for them to pass me by.  Eventually I hit a junction where I had west for some time before I find a river, yes, the river!  I follow it to the waterfall where I have already been and from here out I simply follow the same path as before.  I exit the forest successfully and return the relic to the Dwarf king.  He is excited that he and his people now have hope.  He gifts me a fine silver helmet with wings worth hundreds of gold pieces and a silver chest with dozens of gems making me richer than I could have believed possible.  Indeed, this quest has ended and on a positive light!

Finally, after three books I’ve successfully completed a quest.  Of course, this is only because the book was written to give me that stated second chance.  Unlike Firetop where the portcullis meant I could not technically go backwards and finish exploring unexplored paths and my decision, which I feel is correct in that you can only choose from the options provided, even though you know there are open areas behind you and not go backwards to explore more.  The second chance to go backwards let me complete my task at hand.  One of my favorite things to do thus far after finishing these books is look up other players maps on the internet and see how well my own matches up.  Some are very well put together and the map I drew for Firetop was very close.  Citadel was of course only about ½ complete due to my many deaths and this map while not wrong had many opportunities where I could’ve passed up either of these objects.  Shoot I could’ve gone back into the forest three or four times before finding the artifacts, I just got lucky on that first and second trip.  I’m thrilled with a successful foray and looking forward to the next book.
Blog Fighting Fantasy