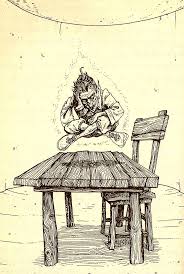 When last we left my intrepid self I was face to face with a pranking leprechaun who had hit me in the face with a tomato, had me shakes hands with a scarecrow and made me believe I was being eaten alive by a sabretooth tiger.  Even with all the reasons for me to skewer this guy I decided he was a magic I didn’t want to fight so I shrugged it all off and he left me with a riddle to decide which of three doors I would continue through.  In the end, I’ve pleased the leprechaun and he gifts me a silvered mirror and a magical sword to replace my mundane one.  Information and new equipment in hand I moved forward.

I entered a small hallway and continue through a door at the opposite end which opens into a wine cellar.  Casks and bottles everywhere I was approached by a dark elf, the keeper of the wine who asked my business.  I lied as I have done many times this adventure and told him I was sent to sample the wine to which he proposed three options.  In the end, I was able to choose none of them but to leave the room so I moved on.  The next room I entered was a carved stone chamber.  Inside was a rock golem (who was responsible for my death on my first trip through) and three treasure chests.  I move towards the chest which makes the golem attack and I cast a Creature Copy spell forcing him to fight himself instead of me.  My construct came out victorious and I was left with the chests as a prize.  Opening the first I found a silver key which I used to open the second in which I found a green key which I used to open the third.  The third chest contained a jar which had a spider in it that had a human face.

While the spider was trying to tell me something (which I feel sure would be important later) I heard a noise from the room behind me of movement coming my way so I stuffed the jar into my bag and moved on.  I head down a hall which goes east (the first cardinal direction I’ve had since entering the citadel).  Up some stairs and into a large dining room with a long table and enough chairs to seat thirty to forty quests.  There are many paintings and suits of ornamental armor as well as a balcony at the other end with two flights of stairs going up.  One on the left and one on the right.  I don’t trust inanimate humanoid shaped things so choose to inspect the paintings and not the armor.  I find a painting of Dire himself.  He is clearly an imposing figure and while I feel luckier for having some beforehand information it apparently scares me enough to cause me some small amount of physical stress.

I move up the left-hand staircase and half way up I hear a click.  The stairs rotate into a slide which I feel like is probably going to end poorly if I go down it so I cast a Levitation spell on myself and reach the balcony safely.  At the top, there is nothing of note other than three more doors to choose from before I continue my adventure and with no forewarning or knowledge of what lies beyond I choose to go to the left.  The door is firmly locked so I choose to break it down.  In the room is a lushly decorated bed chamber with a four-post bed.  In the bed is a sylph who is now awake due ot the commotion of me breaking down the door.  She demands to know my business there.  I have none.  I try to present her with the mirror as a present but she is unimpressed.  Her eyes glow red and she shoots me with a beam of lava basically.  I cast my shield but to no avail an I am basically melted and dead.

Frustrated at my second death I do something I refused to do in my first book and I go back to the room I was in previously and try the middle door.  It leads to a room of small goblinoid children who are playing with their toys.  I stride through their room as though I’m here on purpose and they ignore me.  Exiting through their room I find a spiral staircase and go up.  It leads into a round room with an exit left and right.  I go left where there is another round room containing a chest on an island in the center surrounded by a deep pit.  I ignore it and move on through to another staircase up where I go through the only door which leads to a black room where I am assailed and killed by the ganjees.  I restart at that tower and go right to a room of miks who turns into a snake and poisons me to death.  I restart back at the balcony area and go right into a room with a gargoyle who I cannot hurt
apparently.  I cast weakness on him and get past only to end up in the same places I’ve been which all lead to death.  Clearly, I have chosen poorly and so I decide to end my journey in the citadel of chaos having died six times to realize that apparently if you take that very first set of stairs you are doomed, period, no ifs ands or buts.  I clearly shouldn’t have chosen this path.  Alas, I will stop now and move on to greener pastures/adventures.