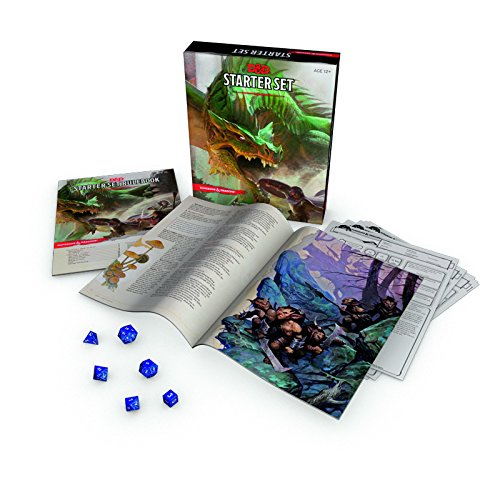 I have a horrible truth to admit.  Despite my large board game collection, numerous miniatures, paints, models, game days, tournaments, trips, etc… neither of my two children have really shown much interest in gaming.  They’ll both play board games if it’s something we’re doing but neither actively seeks out a board game to play.  They’ve both showed interest at a young age of painting my models with me.  My oldest stated the story behind Frostgrave at least sounded interesting and my youngest was willing to play a couple basic gams of Wings of Glory with me.  I am saddened beyond words.  My wife plays board games with me, much more actively than the boys but man do I wish they would have their interest piqued by something.  Every time they’ve shown interest I’ve thrown wads of cash into the fire in hopes to stoke them on but to no avail.  Until possibly now.

Probably a year ago there was a Humble Bundle put together by Paizo selling PDF’s of a ton of their modules and things for Pathfinder.  I got a core book and my oldest looked into it excitedly intrigued.  He tried to gather a couple friends to play but they never managed to put it together which I told him shouldn’t be discouraging.  There are literally thousands of adults who can’t manage to get a group together either even when they live only twenty or so minutes from each other.  His friends and he play a game they call “Imagination Battle” at scouts which is a very free form kind of roleplaying in the loosest sense.  Basically, one person is the bartender and everyone else tells stories about how amazing their person is and all the awesome stuff they do as they fight each other in the bar and the tender kind of sort of referee’s.  I applaud the use of imagination but it naturally turns into a world of one ups-manship.

Kid 1: I have super strength and punch you across the room.
Kid 2: Well I have super speed so I move out of the way.
Kid 1: But I also have teleportation and my first teleports next to where you moved and hits you anyway.
Kid 2: I’m like colossus and have metal skin and it breaks your fingers.
Kid 1: I have rubber bones so they don’t break.

You get the idea.  Fast forward to only a few months ago.  One of the many actual play podcasts I listen to is bomBARDed.  It is a group of musicians from Texas who play a game where all their characters are bards.  This would naturally lead to death so there is a lot of open ended mechanics goosing here but the point is it’s fun to listen to and they play music or sing when they cast spells.  My son has been playing piano for ten of the sixteen years he’s been alive so this idea really grabbed him and rekindled that roleplaying idea in a big way which got me quite excited.  By now, though I still have all my Pathfinder, stuff I’ve kind of moved towards 5th Ed. D&D as its much easier to pick up and a little less rule crunchy.  Okay, way less.  He talked to some friends and again it was going to be nearly impossible to get together but determined not to let it fail this time I got him and one of his friends to full on commit to a day.  I then hunted down two of my friends who though they can’t come over are able to make themselves available once a week.  Enter Roll20.net! Roll 20 is an online virtual tabletop for running RPG’s over the net.  It’s got built in video and voice chat through your web browser and its free.  You can import pictures and maps of your own as well as use built in drawing tools to edit things inside the browser window.  If you’re willing to pay a subscription it unlocks more storage space as well as more features such as a dynamic fog of war lighting that you can set up for your players.  There is a large dedicated community already involved in Roll 20 and many models have been faithfully converted into it already.  Having recently listened to a podcast of a run through of the Mines of Phandelver which is the starter box adventure I decided to have a look and sure enough someone has already converted it into Roll 20.  It’s not perfect, there are some bugs and somethings don’t work quite the way they should but the point is its functional.
So, on the 9th of July 2018 my oldest son started playing in his first D&D campaign.  Proud papa moment.

I’m running the dungeon which will take the characters from level 1 to 5 through four, possibly five dungeon areas.  We’re using the pre-generated characters because that helps along as they all have backgrounds with plot hooks already boiled in to cut down on the work for me and to help ensure that he isn’t too taxed trying to improvise things that he’s unsure of.  Our first session was just about two hours, of which the first probably twenty minutes were spent just getting all the Roll 20 features running for us.  We got through the first encounter in which two of the four party members were reduced to one hit point truly making the point that the game can easily kill you.  At least at early levels and we stopped right outside of Cragmaw Hideout which will be the first mapped dungeon part of the adventure.

I’m very excited to see how the dungeon plays out for the group and if they can come up with non-combative ways to get through pats of it.  At level 1 a bugbear can be a devastating combatant with a couple of good rolls.

He’s playing a Dwarf Cleric and is generally excited about being able to heal people and hit them in the face with a hammer.  I’m excited because he’s excited and he’s very much aware of that telling his mother at one point that “I think dad is more excited about it than me.” Which he is probably right abut.  I hope that he enjoys the campaign because I’m not going to let it end until they finish it.  Chock another on the board for D&D.  Hook is set, now I just must reel him in.