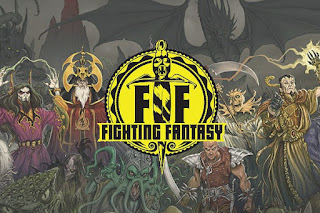 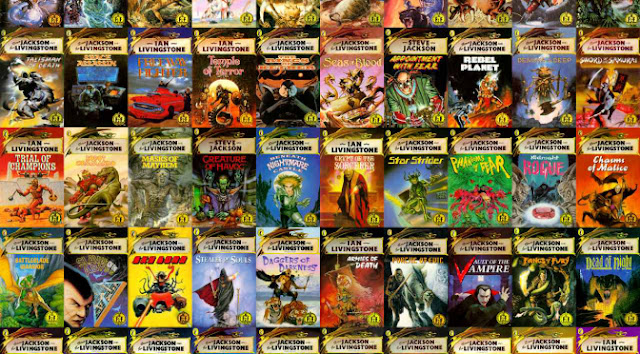 So, if anyone isn't aware of what the Fighting Fantasy book series was I'm truly sorry for you.  Now if you haven't heard of this book series you've very likely, even if you've never read one, heard of a 'Choose Your Own Adventure' book.  A book written to take you on a mental trip through some sort of adventure.  On each page your given descriptions and at the bottom of these descriptions a couple of choices on how to proceed.  Depending on your choice, you'll move on to a new page which will continue the story for you.  This will have you weaving back and forth in the book busting down doors, fighting fierce creatures and stealing the treasure!  Go figure...  Kicking down doors and looting rooms.  Has Steve Jackson and Munchkin written all over it, doesn't it?  Well, it should as Steve Jackson was one of the two men responsible for bringing these books to life.  The other man Ian Livingston is one of the three men responsible for founding Games Workshop so for me at least, yet again GW has given me something great to do in my downtime.

The series of books was distinguished by combining the ‘choose your own adventure’ and role playing game genre’s and did so quite nicely.  The main text of a gamebook doesn’t progress in a linear fashion like a regular book, but is divided into sections of numbered paragraphs. Beginning at the first section, you pick one of a series of options provided, each option being detailed at a separate numbered section elsewhere in the book which in provides an outcome your choice. The books continues like this until your character is stopped by the story for some reason or another such as being killed in combat, or completing the adventure successfully.

Unlike Dungeons & Dragons which gives you a lot of different stats, skills and special abilities the gamebooks only give you a couple of stats which are then randomly determined with the player rolling a six-sided die.  Skill is used to resolve combat, Stamina is your life and Luck is exactly what it sounds like.  Some of the other stories add in additional stats such as Magic.  You also have an inventory that you have to keep track of.  You usually begin the game with some basic things like a Sword, Leather Armor, Shield, Backpack and a Lantern.  Sometimes you’ll get extra things like Potions, Provisions or Spells.  Throughout the dungeons and adventures you’ll end up with new items that are likely better and will replace your old weapons and things that you’ll need to progress and complete the adventure like keys or hints to bypass certain areas that would otherwise end with your death.  One of the innovative ideas that was come up with was printing random pictures of dice at the bottom of pages so if you didn’t want to carry your dice around with your book you simply flicked through the pages and stopped on one giving you a random result.  The books also usually have a character sheet printed inside the book for you to use.  Naturally not wanting to destroy my copies I use notebook paper. 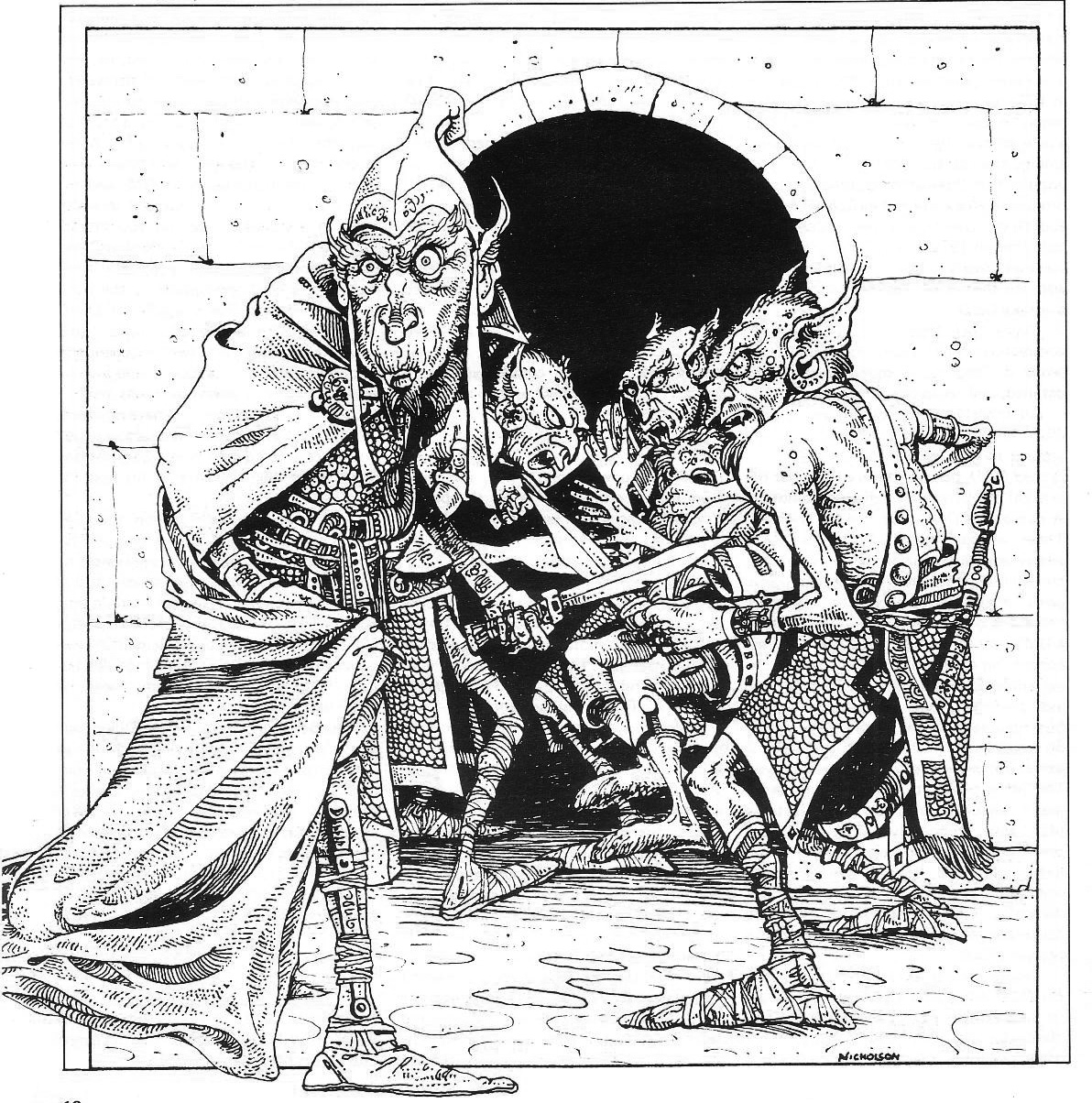 The original books were published between 1982-1995 by Puffin books.  Wizard Books acquired the rights in 2002 and began reprinting the books along with having some new books written and published by various authors who had worked on the previous series of books like Ian Livingston.  Wizard let the rights expire in 2012 and they were then picked up by Scholastic books in 2017.  They began their run immediately releasing a new book by Ian Livingston and then quickly between reprints and new stories released another eleven.

There were over seventy-five books released during the Puffin era.  Wizards put out forty-seven books, mostly reprints but six were originals added to the lineup with new stories.  Scholastic has only had the rights for about a year but has already released twelve books, two of which are new stories to the lineup.  The nice part about all these different publishers and reprints is that the books are for sure out in the world, especially when you consider the original series from Puffin sold over ten million copies of the books.  This means that if you keep your eyes open you can find them in a lot of second hand book stores.  The cover art tends to differ from publisher to publisher but they’re all great to me.

For those who don't want to buy books, even though I feel that's really the way to go, they are being converted into a digital format available on Steam (https://store.steampowered.com/bundle/285/Fighting_Fantasy/) and an IOS App (https://fightingfantasyapps.com/).  I'm sure there is probably one for Android as well, but I don't have a Droid.

I’ve already started the first book in the original series which is The Warlock of Firetop Mountain and I’m going to do something for the Blog or Podcast while I go along, though I’m not entirely sure what.  Maybe blog it out as a cohesive story, or use the podcast to turn it into almost a basic audio drama but I’m definitely excited to do something along those lines so keep an eye out for that.

Post script: While turning it into an audio drama sounded great that would be a lot of work and while it might still be fun to do sometime, it's not something I can really do at the moment so I present you with the first of my blog experience of adventuring in the Firetop Mountain!