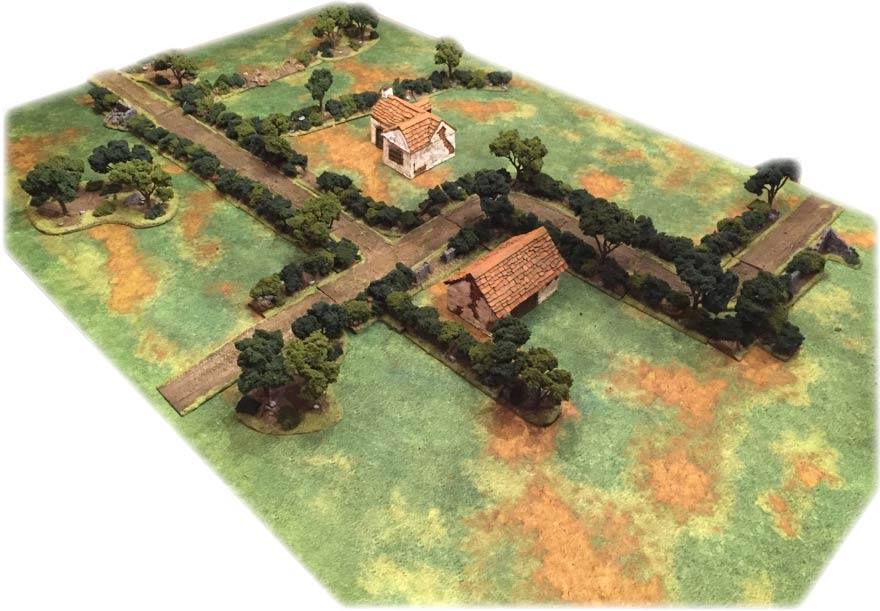 Here today to discuss something that may be as important, possibly the most important aspect of our hobby, yet one that is rarely discussed but is most assuredly always present and that is the surface upon which we play our games.  Let’s face it; a tabletop miniatures game simply can’t happen without a tabletop.  The question that is left is what kind of tabletop to use.

I’m spoiled.  In fact, if you’re into this miniature gaming hobby as deeply as most, we’re all spoiled for choice at least.  When I first got into the hobby it was at a local game store who had plywood tables painted green and flocked with static grass.  Considering that I was fourteen at the time and didn’t have a place of my own it was nice.  The terrain the store provided matched and all was good.  As I got older the store evolved of course.  Most of the terrain ended up being based on 12” tiles so that the boards could be squared into an ever changing surface although you could’ve done that without the tiles and I would’ve preferred it that way, but this is where it went in our area.  Eventually the store created table toppers which are made of wood and insulation foam flocked with walnut shell and paint.  This made the tables look as good as those with a sand surface but at a fraction of the weight and when miniature games weren’t being played the toppers could be stacked against a wall and the folding table underneath used for other gaming purposes.

My personal growth of tables however went like this.  My first board was at an apartment and I had no room for a full size so made a smaller table at 5’x3’ and painted it green.  It wasn’t something I was super proud of but it was something to play on.  The terrain was equally bad consisting mostly of foam hills and some felt outlines for forests.  I didn’t even have buildings.  When I moved into a house it remained mostly the same except that I added some buildings to my collection and bought a piece of felt to put over the tabletop so it looked a little nicer.  Then the game store closed and in return for helping them clean up I was given one of the nice eight foot tables made of wood and flocked with the walnut shell.  They’re very nice, having been built with a 2’ space on the end to set models and books and the like.  Now, I understand not everyone has the permanent area to use for gaming that I do and thus must be just a hint more reserved in their tables.  To that end there is now a number of companies that have formed their own little niche industry in providing us with table mats to throw over a kitchen table, or folding table, or plywood board to give us an attractive gaming surface and yet retain that usability of being able to easily put it away or take it off and still get use from our kitchen tables without angering our significant others.

The first to break was the neoprene gaming mats.  These were basically gargantuan glorified mouse pads for your computer.  They tended to be between 2 and 3mm thick with that nice rubber style backing so they didn’t slide.  The printed graphics were crisp and because of the material your dice didn’t make an annoying rattle or clatter when rolled.  This meant that your hobby may have become quieter in the process which could be especially important if you had children and your hobby time occurred mostly after they were in bed.  I’ve owned a couple of these and have always enjoyed them quite a bit.  The only real issue is that the edges can begin to get frayed with continued heavy use.  Also, dice while they don’t make much noise do have the tendency to bounce a little wildly because of the rubberized material.  The largest drawback to the large neoprene mats was the cost.  They tended to be between $90-100 USD and that was without the cost of shipping.

The next type I became aware of was a fleece battle mat.  These were also able to be printed with high quality images and so looked just as nice.  The benefits of these at least so far as I can tell are that they tend to be a little oversized so you can place your hills under the mat which gives you playable hills that don’t disrupt the image of you mat.  Also, they are machine washable should you spill something and since they’re made of fleece they work as back up blankets when you’re cold.  While the mats I have of this type are hemmed I could see if that hem came loose or if you snagged the cloth this type of mat could tear or begin to unravel.  Also, the fleece doesn’t seem to deaden the clatter of dice as much though they also don’t bounce as much on the fleece as they do the neoprene.  These mats, while cheaper than the neoprene still tend to roll in around $60-70USD.

Most recently I’ve begun seeing mats made of vinyl which is a plastic.  The graphics on these mats are extremely crisp as the printing business has been using vinyl for a long time in commercial billboard and advertisement design.  Being plastic they are nearly impervious to spills and stains and like the fleece mats they tend to have a hemming or edge to them to help keep them from tearing.  My biggest bug bear with these is being plastic they tend to have quite the shine and glare to them under the large fluorescent lights we’re used to using in game stores and basement/garage areas.  The average price for these mats is the cheapest running between $55-65 USD on average.

I’ve seen some homemade mats on the internet made from canvas drop cloths using tile caulk to give texture but I’ve never seen one in person so cant’ attest to them in any way.  Though, if they work out well that would certainly be the cheapest option as a canvas drop cloth tends to run about $25-30 and a couple tubes of caulk would probably only add another $10-20 on top.  Playing surface much like any part of our hobby is as much up to personal preference as anything.  I did find an excellent YouTube video put together by someone else going through a lot of play mats and comparing them so this is an excellent resource if you’re thinking about purchasing one.