Today I'm attempting at writing an article as opposed to just talking about what I've been doing recently.  Look out.

Recently while setting my basement up for a couple of games I had a discussion with a friend about how much fun i have setting up tables for Flames of War.  Generally I put together European themed tables.  I own a ton of terrain for the various systems I play but few of them have given me quite as much joy to set out and look at as Flames.  I own enough desert themed terrain that I can also put up a table of that but primarily I love that European look of the French countryside; fences, hedgerows, buildings, roads, telephone poles.  It’s just beautiful to see all laid out.

I've been playing miniature games since I was fourteen, so for just over twenty years now.  That is a long time and while every game system I’ve played involves terrain not every game system themes it well, if at all.  To me a game is about immersion and the suspension of reality as you pour yourself into being involved in that battle and nothing else.  To try and think strategically about how to command your troops takes over all your thought.  This is a much easier state to put yourself in when you see everything laid out beautifully before you in miniature. 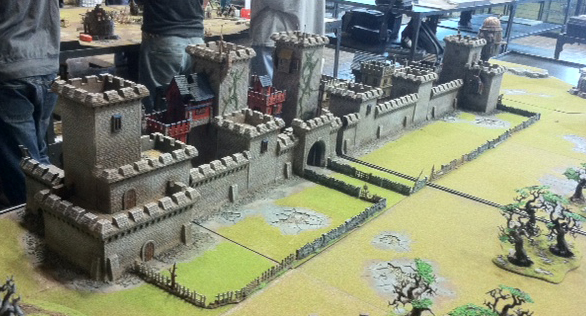 For the majority of my time in the hobby I played Warhammer Fantasy.  Sure, I’ve seen exceptional terrain in that game, but far too infrequently.  To be completely honest, it never bothered me much either.  I think that is partly due to the fact that I really focused on being competitive during that timeframe.  A goal that I never quite achieved honestly; I got a few awards, mostly painting and sportsmanship.  I even finished 4th at Adepticon once in the 1,000 point events having won every game I played that day.  Still, looking back now the game never pulled me into it in a thematic or cinematic sense.  You’d walk up and look at you battlefield.  A couple of forests, a few buildings, maybe some walls and a water feature but honestly there was so little sustenance that it was easy to ignore.  That isn’t to say that the terrain wasn’t good looking, it just wasn’t enthralling to the mind.  This same standard holds true for Warhammer 40,000 and even now for Kings of War.  The terrain has gotten a bit more fulfilling with Age of Sigmar and certain events definitely go all the way on it but in general I’ve still not really been pulled in like I want by the tables themselves. 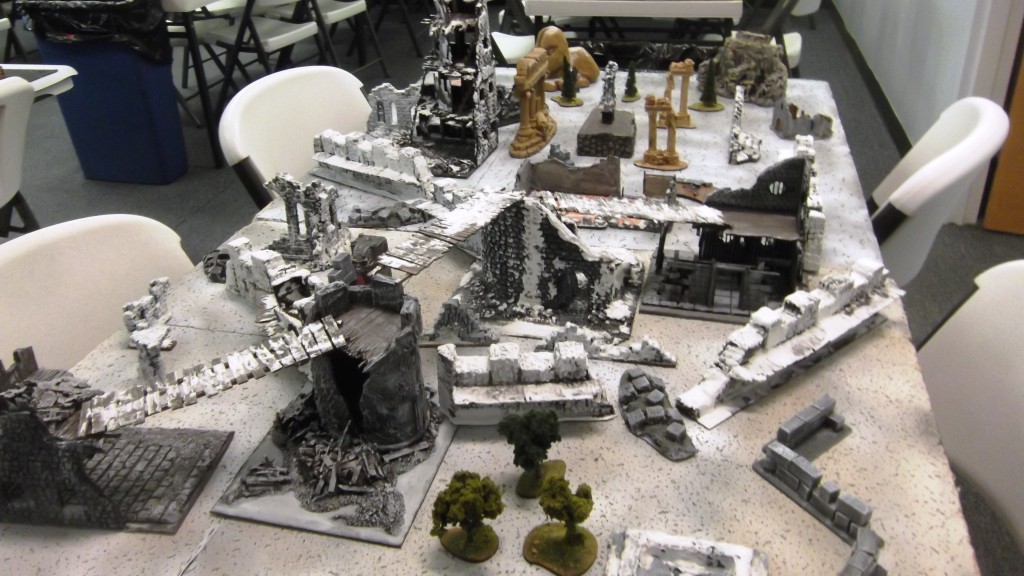 The games I’ve generally found where terrain can envelope you are the skirmish games.  I have many fond memories Necromunda in my teenage years.  The bulky plastic risers, the cardstock, soda cans, straws, PVC pipe and more.  Yes it wasn’t what I would call extravagantly assembled or painted but when you put a whole load of it on the table it certainly drew you in.  There are few things that will catch a random passerby as quickly as an amazing looking table.  The same doubled for Mordheim.  While a little harder to do with just statues, walls and gothic style buildings, if you made them tall enough or outlandish enough, they most definitely stood out.  Blood Bowl while predominantly played on a board can even do it.  I’ve seen (and built) huge stadiums from scratch and boy does that ever make you just kind of stare when you see two fully painted teams lined up across from each other with stands full of spectators from across the Warhammer world. 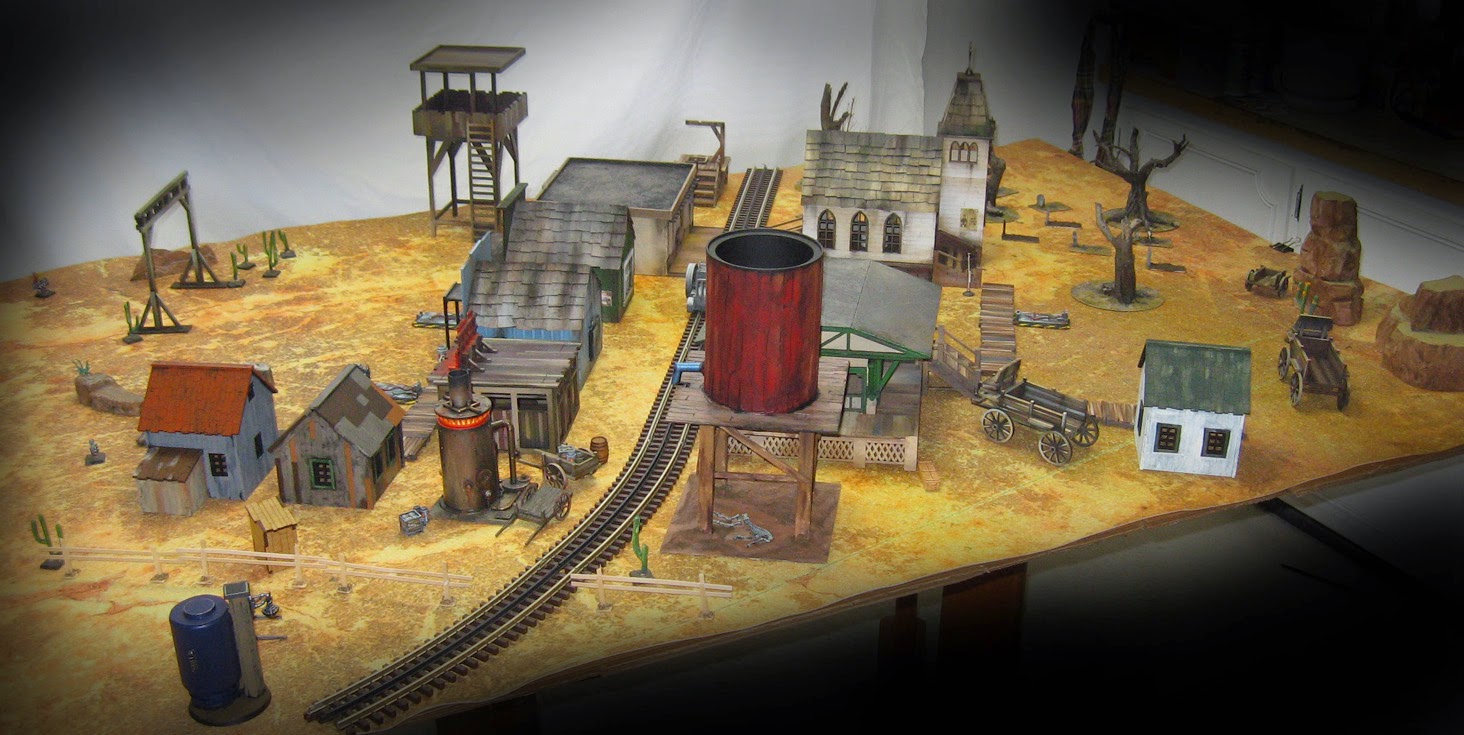 Wild West Exodus took us in when we first started playing it a few years ago as well.  It was such a dramatic change of theme for my group going from Medieval Fantasy to the Wild West.  Not only did it inspire me to scratch build a number of buildings but I also purchased a lot to fill up the table.  Cacti, old wells, gallows, horse drawn carts, toy train sets and more.  When laid out it certainly pulled us in.  It was a joy to set those tables up before we played trying to think of where the town’s main road would be and what business would be there.  Having even a semblance of historical context we planned boards around the town of Tombstone and the fictional town from the most recent Magnificent Seven remake.  It made sense when the sniper climbed the water tower by the train tracks for a better view.  There were guys on the roofs and balconies happy to fall off when shot.  The thematic terrain reeked of those spaghetti westerns of the 60’s and 70’s. 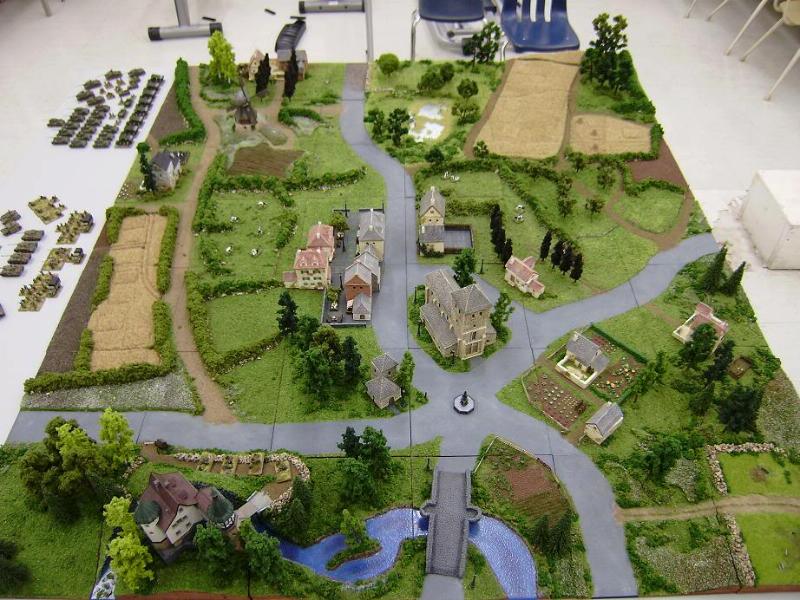 Finally we get to where I started this article and that’s Flames of War.  When I attended Adepticon my second or third year the Warhammer tournament was sharing a room with many other game systems.  That year specifically I remember the Flames of War group had built a giant table representing one of the D-Day beaches.  It was massive, at least twelve feet long with a huge cliff, giant bunkers and landing craft galore.  It was one of those things like Games Workshop used to do with giant narrative games where everything was there and all you had to do was walk up and roll dice.  Lucky me that my youngest son has gotten into HO Scale Model Railroading and boy do I have a lot to work with.  Sure I already had rivers and some train tracks from WWX but now I had another use for those 15mm buildings I’ve been buying him.  When I set up a table there are roads, telephone poles, houses, ruined houses, barns, farm fields, ploughed fields, fences, walls, trees, woods.  In the end I know it’s a game but when I step up to that table to play the detail draws me in.  I get down to eye level and happily push my little tanks around trying to find them cover while my infantry hops over that wall to engage the enemy.  I never felt like that playing Warhammer, I never felt invested like I do in Flames; I looked at the terrain from a clinical sterile standpoint of only how it would affect me in the game and whether it was to my advantage or not.  It just feels vastly different in the way my brain perceives the game. 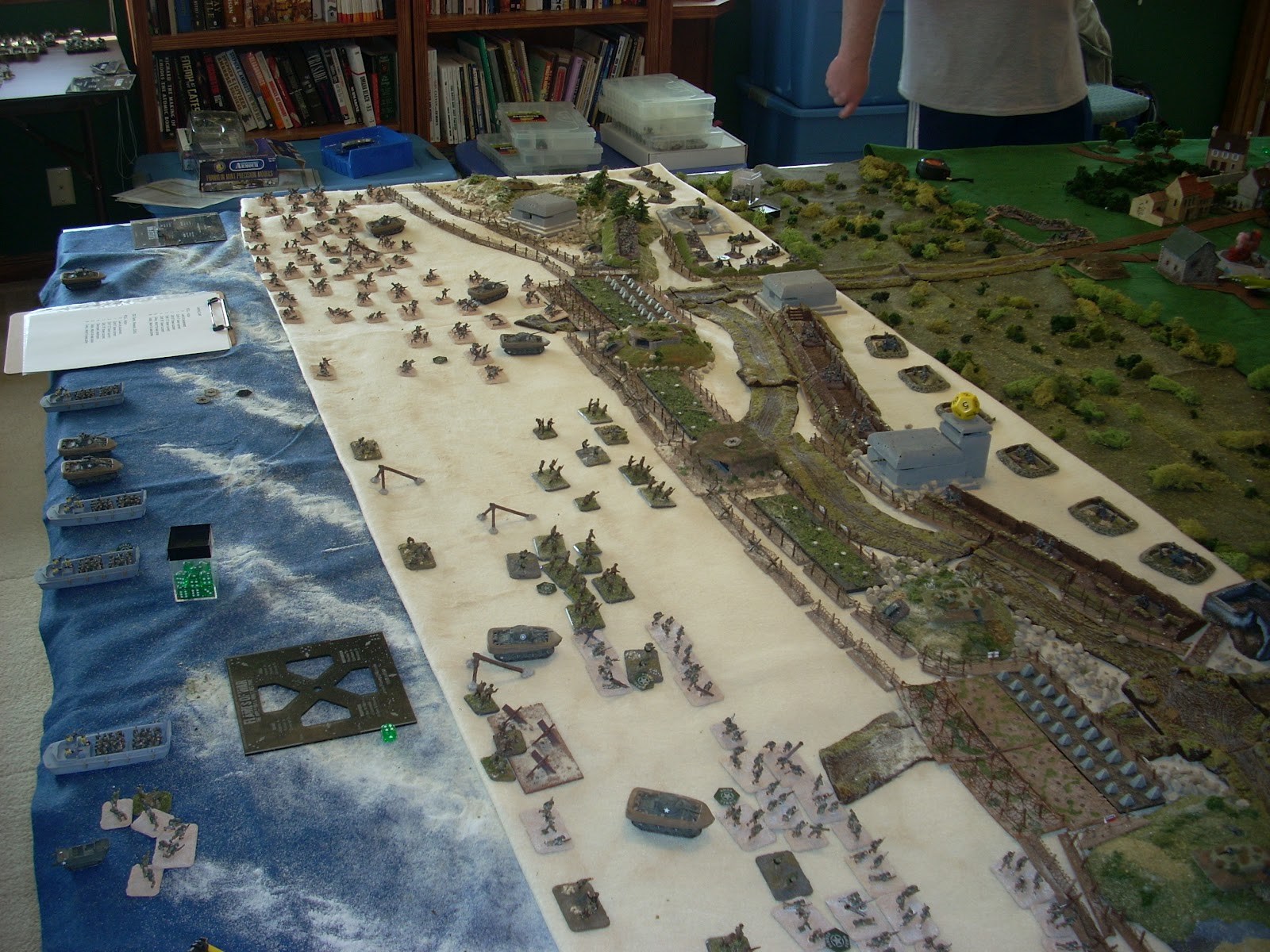 Is thematic terrain important?  Absolutely!  Sure, I could play Flames or any game for that matter with cardstock scenery and cutout felts.  The gameplay wouldn’t change.  You’d still use the same rules and achieve the same ends, but for me that personal investment just wouldn’t be there if it weren’t for the terrain.  I can’t feel like I’m defending Al Alamein or fighting my way out of the OK Corral if I can’t see it.  Maybe as a younger kid my imagination could fill those gaps for me, but now, perhaps I’m spoiled.  Terrain is super important in games and honestly with some effort and elbow grease you can manage it for not a massive investment.  It is worth every penny and I hope that you, dear reader, feel the same way.
Blog