So like a true magpie gamer I’ve flittered off to something new and shiny.  At least it’s new to me.  The game Gaslands seems to have been discovered lately by a lot of people I am friends with on Facebook and Twitter.  After seeing fancy hot wheel cars float up across my digital screen I decided to look it up.

So, if you’ve ever wanted to play Mad Max, then this may be the game for you.  It operates off of a bunch of different kinds of mechanics that you may be used to.  It is a “miniature” game of kinds but instead of using any specific company’s miniatures you simply go out and buy Hot Wheel’s cars or any other manufacturer’s toy cars and modify those with bits and pieces.  It also uses movement templates ala Star Wars X-Wing who themselves borrowed the mechanic from Wings of War.  Finally there is also a bit of a Yahtzee mechanic in rolling dice to decide how you’re driving works for you.  It all smashes into a pretty neat little game.

There is a list of types of vehicles; motorcycles, cars, jeeps, vans, buses, monster trucks and more; and then a very large list of weapons that you can equip onto the vehicles.  These vary from pistols and machine guns to rocket launchers, oil slicks, caltrops and even lightning guns.  So everybody is working from the same list of vehicles and weapons, but then you also get a sponsor.  Each sponsor unlocks some of the special skills and weapons in the case of the lightning guns.  You then use these vehicles to drive around causing carnage destroying each other’s vehicles while technically trying to win a race or scenarios.

The game does have some interesting mechanics which seem innovative to me, whether or not they are new.  Every full turn consists of 6 rounds which correlate to the gears the vehicles may be in.  In phase 1, every car in first gear can activate.  The same goes for second, third, fourth and so on.  However if you reach a phase that your car isn’t equal to in gear then you are done for the rest of the turn simply left to watch those other vehicles buzz around you and possible blast you away.  Guess you should’ve moved faster!
Plenty of things you do give you hazard tokens (almost everything) and once you gather enough hazards you start risking flipping your car over and wiping out.  This doesn’t necessarily take you out of the race but it can really shut you down as when you wipe out you drop back into first gear.  Even more dangerous is that you check every car for wipeout regardless of if they are activating at the time or not so even if you didn’t move this turn but someone slammed into you they may have caused you to gain hazard tokens and wipeout.  It really is carnage. 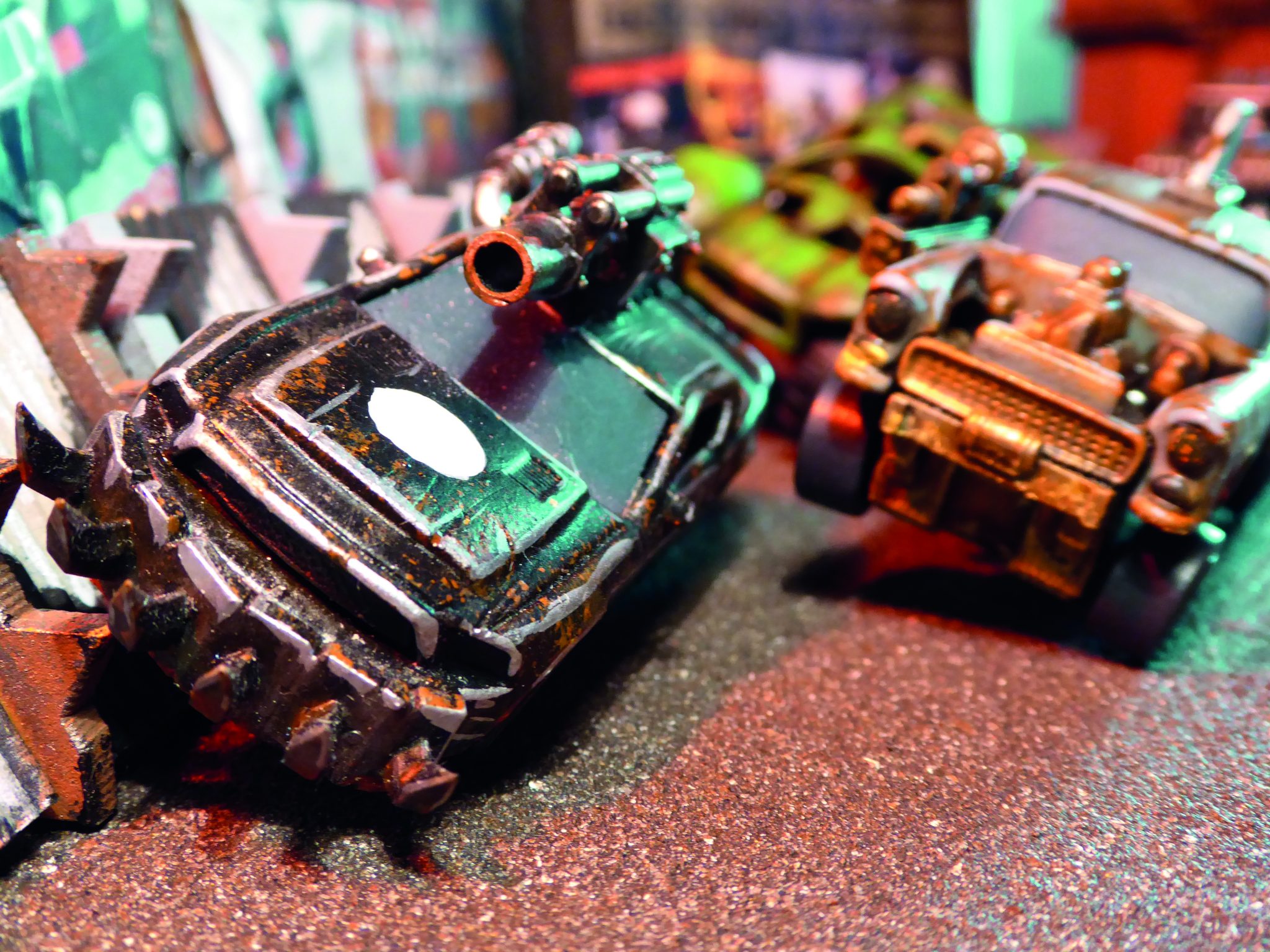 This brings me to what may be my absolute favorite part of the game.  The Rule of Carnage!  Most games have a rule that says if you can’t decide on an ambiguous rule then roll a 4+ or do what makes the most sense or the player who is currently activating chooses how the rule works.  Not in Gaslands.  This rule says you must use the option that causes the most damage and destruction.  This is how a game should play in my opinion; especially a game like this which is built entirely around a Mad Max type world.
So if any of this sounds interesting to you, then you should definitely check it out and give it a thought.  You can bet you’ll hear some more about this in the future.
Blog Gaslands