Posted by The Hobby Heroes on January 22, 2018
As part of my dive into Flames of War I thought it would be fun for those who are learning to learn along with me.  I've gotten 4 games under my belt as of the writing of this particular post and so I'm going to do short write-ups of those games along with a 'What I've learned' or otherwise 'What I forgot' bit.  Currently I have two opponents.  My friend Jim who lives an hour away and, my family currently hosting an exchange student (Dani) from Sicily who has learned to play along with me and is using my Germans army.  Also, I'm set to play a game with Jim this weekend and we'll be trying to turn that into a video Battle Report for the YouTube Channel so keep your eyes and ears open for that.  Everything said, let's get started with the first game.

4x4 table
Free For All 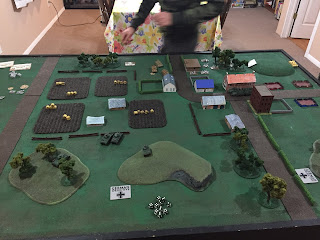 Farm fields and forests on the left 2 feet of table from my perspective, a small town and roadway with hedgerows on the right.  ARP started in tracks on the road going into town, Sherman in a wood on the left with HQ between the two units behind a hill.

Germans started AKP hunkered down in someones back yard of the town, Panzers across from Sherman behind farm field fences and some trees and the HQ on the far right past the AKP near the town.

US got the go and I road dashed the ARP into town hiding behind a large building to avoid fire.  Moved Sherman's to edge of wood and HQ up hill to 'hull down'.  Fired at the Panzers and bailed one.

Germans failed to remount Panzer.  Moved up to fences and shot at Sherman killing one.  AKP held and HQ Panzermoved up my right flank. 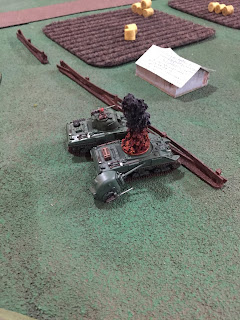 US remounted and wiffed on Panzers.  ARP got out of trucks and took positions in numerous buildings near them laying small arms fire into AKP pinning.

Germans again failed remount and moved remaining Panzers into town to support AKP.  Rallied and threw a mortar on the big building my tracks were hiding behind and bailed one.  HQ continued to crawl forward flank.

US shelled the bailed panzer to death.  Moved the tracks around the building sides to give even more MG fire.  Continued laying fire onto the AKP trying to wither them down but bulletproof cover was slowing it down big time. 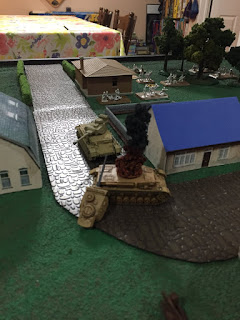 Germans Panzers moved into town, one still had a bead on Sherman's and managed to take one out.  HQ blew past the tracks without shooting at which point I realized he was being left alone running for an objective.  He continued lobbing mortars at the ARP with little success.  Turns out its very difficult to kill infantry. 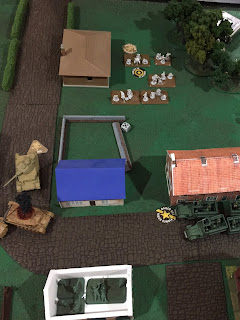 US luckily my HQ was still on that hill in the middle of the board.  He dashed off to guard the objective his HQ was heading for.  The 2 remaining Sherman's blew one of his 2 remaining Panzers up.  ARP bazookas made their way into buildings near the remaining panzer.

Germans, the HQ began duking it out with my HQ for that objective while he had a good turn finally, blowing up a track, killing a couple stands and pinning the ARP without the mortars.  Panzer that was left managed to stick around and put some machine gun fire into ARP too.

US, the HQ's were busy with a slap fight while the bazookas got to work toasting the last Panzer.  The Sherman's began their run across the fields toward the now open objective while the ARP pinned the AKP down. 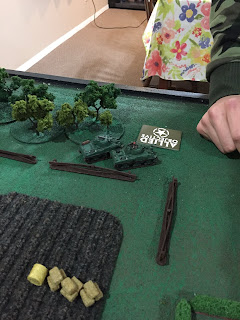 Germans desperate decided to go for the moral victory if they didn't get lucky and kill my HQ Sherman so they assaulted my ARP on the my left most buildings successfully pushing them out and invading my nice little homes.

US moved again towards the objectives which he now was going to be able to do nothing about.  Bailed his HQ Panzer.  Elements of the ARP moved forward to fight the AKP out of their foxholes.

We basically knew the game was for sure done at this point as if even if he remounted his Panzer and killed my HQ my Sherman were going to be in possession of the objective by the farms at the start of my turn but we rolled dice anyway and the HQ did remount but no kill.  He assaulted some more in the town but was beaten back and I ended up with the victory.

After Action:
So as our very first game I didn't even look at points.  I figured Panzer 4 Longs and Sherman's were pretty equal and then we each took a Support Infantry Platoon.  Learned that moving on roads makes ARP amazing with a massive 32" Dash speed.  We completely forgot the rule about +1 to your Armor at long range.  Learned that sometimes its easy to lose track of your flanks when there is so much in front of you.
FoW