Flames of War - Lets Get This Party Started

Hello everyone!  Watch out, it's Flames of War!

So... I picked up on flames of war.  Its' happened, I’ve finally went full Grognard.  I picked up the Open Fire set back at Dragnofall in 2016 because I’ve always had an interest in the World War 2 setting and the open fire box was an amazing value even to my untrained eye at the time.  it brimmed with 8 Sherman’s, 3 Stugs and a veritable boatload of infantry.  So, I bought it thinking it would be fun to get into at some point as maybe a one off now and then game.  Spin around an entire year later and in my lull, I finally decide to open it up and start looking at it which coincided well with the 4th edition release of the system.  A more perfect time to get into the game probably doesn't exist since I have no knowledge of previous editions to cloud my learning or judgment and so I’m ahead full steam and decided that I’ll set myself a goal of playing at Adepticon in 2018 using the US since most of what I have can fit into the point limits for that.  With the help of a friend from Chicago area I came into a 2nd set of infantry from the Open Fire box set doubling what I had, and he also sold me a handful of extra tanks too.  I went and bought a bunch of halftracks and am well on my way to a nice sized mechanized army of the US.  This puts my US collection to the following:
7 Sherman's 75/76mm
3 Sherman Fireflies
-I also have 3 M10 GMC Turrets that I can swap onto the Fireflies for Mid-War play.
1 Armored Rifle Company
-Which consists of Rifle Company HQ, 2 Armored Rifle Platoons and 9 M3 Half Tracks
2 Airborne Rifle Platoon
1 M1917 Machine Gun Platoon
1 T28E1 37mm AAA Platoon
3 T30 75mm Assault Guns
6 M7 Priest Artillery Battery
4 57mm Airborne Anti-Tank Guns

With the release of 4th edition having been so recent I have options.  Technically the open fire box was designed for late war armies (specifically Market Garden) and I may get some stick from the truest of grognards for doing what I’m going to do but I’m going to run my British Sherman’s in the Adepticon mid war tournament. I know they aren't the same as the us Sherman’s that were in North Africa, but I want to play and regardless of smooth or welded hull, from 3 ft. away a Sherman looks like a Sherman.  also, the 3 M10 GMC turrets should be on a modified M4 flat top hull so just turret swapping won’t be historically accurate, but again, I don't think anyone is really going to burn me at the stake for this, especially since I’m not likely to be running those turret swaps at Adepticon, just regular 75mm Sherman’s.  Though, I admit I’m very tempted to pick up some M3 Lee’s.
Between the Open Fire box which was again designed for late war and some things I got for Christmas I have a small German force consisting of:

So, I'm going to be splitting that into mid war which means splitting the Grenadier Kompanies up into Africa Rifle Korps which will require me picking up some 2.8cm Anti-Tank Rifles and a 5cm Tank Hunter Platoon, but after acquiring those I should easily be able to put together a roughly 80 point German list for mid war and I'm not quite sure how that will shake out yet.

One of the things that has me the most excited for FoW right now is that my youngest son got into model railroading last year and ho scale seems almost perfect for flames of war if not just slightly over large.  This means I’ve already got a bevy of cool terrain to use for my games and boy I can't wait.  also, he doesn't seem as 100% disinterested in FoW as he does every other miniature game I own so maybe, just maybe I can cajole him into this one.

One of the greatest things about picking FoW here at the beginning of 4th is the complete lack of background on first through third editions.  I have no baggage and thus no basis for comparison on whether something is good or bad which means I’m playing for the sake of playing which is just more fun than anything.  Man, I can't wait to really get started.

Below are some pictures of models that I've been painting and to keep up with what I've finished head over and check out our Twitter feed as I post on there quite a bit. 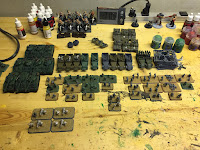 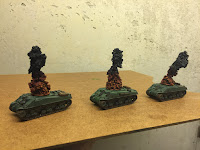 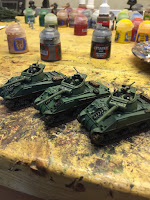 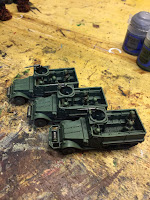 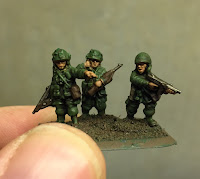