When someone thinks of the Wild West, its hard not to conjure images of cowboys, gunfights and train robberies.  Naturally Wild West Exodus lends itself to this image and as such Outlaw Miniatures saw fit to design a train model for their game.  That said however, the train comes at a hefty cost due to the resin used in its construction.  A hefty cost of $399.99 USD and a model that I can't even fathom the weight of as I've heard the entire thing is just big bricks of resin.  Now the players of the game of course have long since debated on the model scale size of trains and buildings for WWX wanting desperately to get their hands on trains that are adequate in size for the game but the fact is that there isn't a perfect fit.  WWX falls firmly between its two closest model scales for train hobbyists.  As such you end up either too big, or too small to truly fit the game.  That said, I still couldn't resist myself.  I wanted a train and dammit I would have one!  So after a ton of looking around through local hobby train shops, toy stores, garage sales, etc... I finally settled on this one. 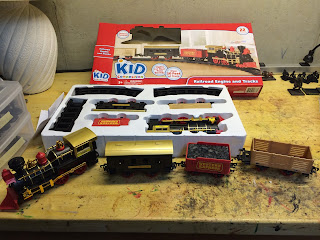 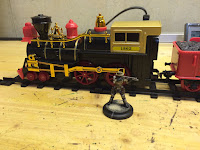 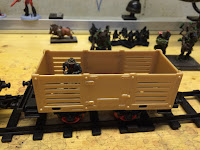 This train is sold by Walmart in my area and was a whopping $9.99 USD.  So, yeah, I immediately bought two of them.  You can see in the to picture what comes in a set.  There is an engine, coal tinder, passenger car and cattle car.  I've taken a couple shots of models next to the pieces for scale.  You can see that this engine actually falls on the too small side of scale, but I have a Christmas train set that we set up around our tree which is accurate scale size and it is far too large to use in a game.  Now working with what information I can get from the Union Heavy Rail model from Outlaw I had to settle on how I'd design this train.  You can see some photos of their model below. 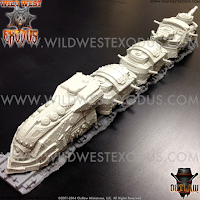 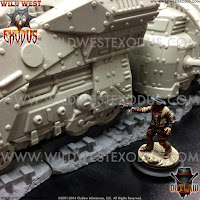 So the official model has no tinder or coal car.  Of course it doesn't really have a passenger car per se either, but this is why I bought two train sets.  I'll dump the coal tinders and stick with the other cars to turn into my train.  The first modification I made was to the engine.  I took the battery compartment out and extended the floor with a bit of plasticard.  I mean, if the train has an engine then I want someone to be able to stand there. 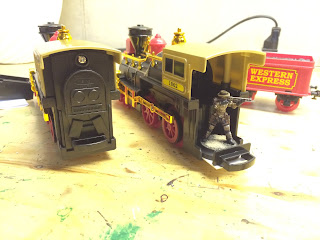 It wasn't until after I'd extended the floor and cut all that off that I realized I would need that little loopy part to hook the other train cars to.  Oops.  So I stuck it back on there and it looks a little out of place.  It will just have to do.  Then I burned through my bits bins looking for appropriate parts to try and make the engine a little more hi tech or steam punk looking. 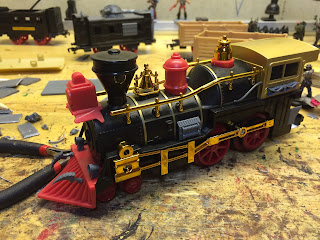 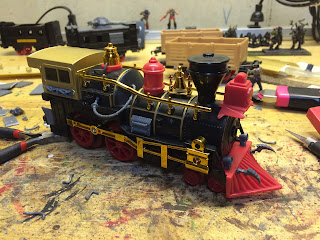 Its a good thing I played Skaven in Warhammer.  They have a lot of great steam punk fantasy bits.  I then had to move on to the rest of the train.  To replace the two gun cars from the Outlaw miniature I took the two cattle cars.  I removed the roofs from the two passenger cars and glued them onto the cattle cars to enclose them.  Cut some plastic basing and covered the slats.  Then I press molded and cast 10 gatling gun pieces for the trains guns.  I'm never super satisfied or impressed with press molding but I wasn't going to spend money to pour a PVC mold for these. 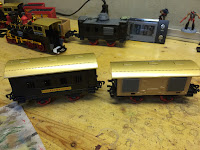 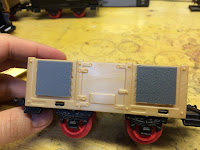 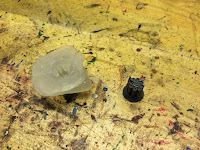 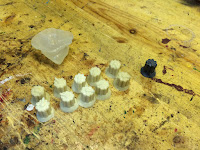 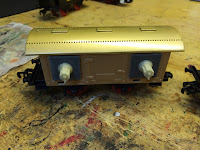 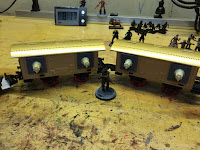 What great results.  So far I was super thrilled with how the train was coming along.  I moved along to the caboose.  I had removed the roof of the passenger cars to put on the cattle cars so I had to cut some more plastic basing to remake the roof.  The Outlaw model has two great big cannons on it and I did not have anything I could think of that would replace them well.  I had a single turret from an Empire Steam Tank though so instead of two turrets I opted for one.  I then had the barrel section from an old Dwarf Organ Gun that while it wasn't on a turret I stuck on the back to just give a "more gun" appearance.  I then went through and collected a few more armor pieces and repeated the press molded guns to complete the piece. 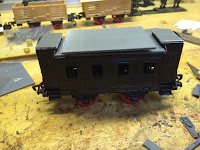 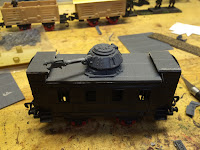 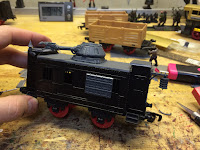 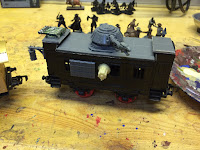 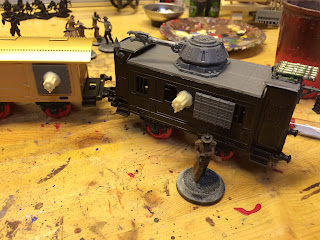 With the whole of the train complete and ready to move on I thought I'd get a shot before priming the entire thing. 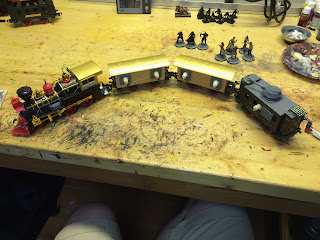 Oooh, I'm excited!  I took the wheels off and primed those a metal color which turned out to be way to bright and needed a very heavy black wash.  The whole train got a heavy black priming.  Then I simply painted the guns metal.  Added a splash of color to the guns and the front of the train.  I would love to see the train in more color but I decided that is going to take a lot more effor than I'm willing to put in at this second.  I ended up just lightly drybrushing the whole thing with a dark metallic.  This gave the edges a bit of color as well as caught the rivets sticking up off of the piece to give it at least a little color. 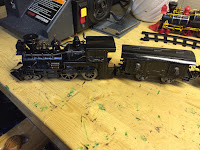 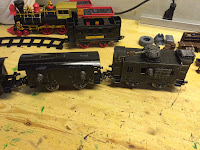 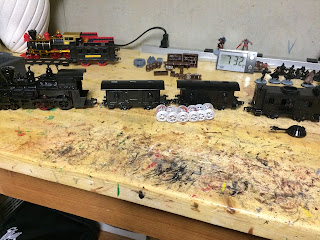 Fantastic!  While I admit it is not perfect it looks great on a tabletop and will fit the bill nicely for literally one twentieth of the price.  Great value! I'm left with an extra engine, coal tinders and a passegner car with no roof.  Those will eventually get smashed into a piece of terrain to be used in some objective based scenario, or perhaps if I ever get really crazy I'll build an indoor table that is some kind of train factory.  That could be a lot of fun too.  That, however is a long way off in terms of timetables. 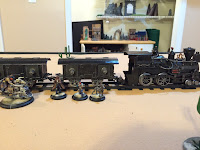 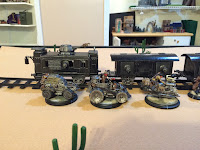 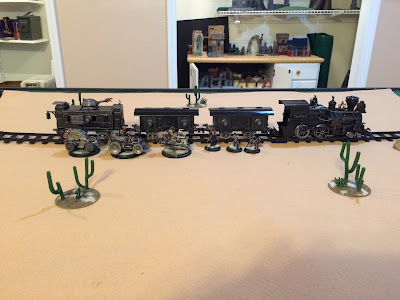 Here is a pic with some models next to it for size reference on a tabletop.  Yeah, I'm happy.  Thanks for looking at the blog post and hopefully it inspires you to hit this same piece up for your games.  Have a good one.
Blog WWX