Posted by The Hobby Heroes on February 06, 2016
I'm terrible at posting to the blog.  I basically use the damned thing just to aggregate the podcast which I really shouldn't.  I have plenty of useful things I could post here if I had the time and willingness to do so.  Sadly, on average, I don't.  I'm a family guy with a wife, 2 kids and a job.  Both of my boys are in scouts and plenty of extra-curricular activities keep the family quite busy.  Nearly so busy that I sometimes wonder how I ever find any time for gaming.

Still, I'm going to endeavor to do better.  My goal is to make at least 1 post between each show.  Not like that’s a glut of information but I'm going to try and put an effort into that.  So this is going to be a post here and in this particular post I'm going to discuss a very simple campaign idea I've got.

Since my primary play group is myself and two friends that are able to meet twice a month I wanted to give us something to do along the lines of a campaign.  Now we've got a number of problems to go against us here.  First is only 3 player’s means it’s got to stay small.  You can’t have an enormous map where it takes forever to even reach each other’s borders.  Second is that many campaigns fizzle out quickly and I feel that is clearly also a danger with too few players as in our case.  If the campaign lasts too long we’ll get bored trying to play with deadlines.  Finally campaign complexity can really murder a campaign.  Not everyone likes the minutia of trying to plan huge turns, building towns, burning crops, feeding armies, etc...  So, lets' address.

I really like maps and I have a GW mighty empires set nice and painted up which I'd really like to use. 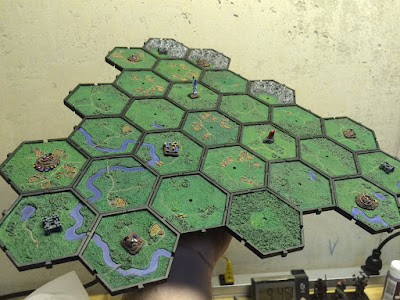 So you can see from above the map that I've assembled for us to use.  You'll note that it is also fairly small.  28 tiles, of which we'll begin the game each in control of 4 tiles limiting open space to 16.  That's pretty small I believe.  Considering most campaigns I've seen use the entire map set.  I felt like this was a nice number.  Depending on how players move their armies (we'll each start with 3) the first couple of turns may go quite quickly without us even seeing a combat.

Secondly we need it to be fast.  I want substance to the game but it also needs to be quick but also have a preset end point in case it does start to drag on.  For our experiment here we’re going with two victory conditions.  One is to simply conquer someone else’s capital city.  First player to control 2 capitals wins.  The other is a campaign turn limit.  I figure 20 turns is a good number to start with.  We can of course modify from there.  If after 20 turns nobody has managed to capture another player’s capital than the player with the most tiles in their control wins.

Finally we get to the level of complexity issue.  Some games have very complicated rules for armies traveling.  Weather conditions, random hazards, etc…  We don’t need all of that so we’re simply going to ignore it.  IN fact, even if you invade an opponent’s territory we’re not fighting a battle unless it’s a key point or that player’s army happens to also be in that tile.  A simple dice roll will keep things moving along quite nicely.  We don’t want there to be nothing worth fighting over though so I am adding 3 special locations which will confer bonuses to a players armies in battles as long as they are in control of it.

I’ve taken the liberty of providing the files in .pdf format for this campaign of mine below.  Please feel free to download them and have a look.  If you like the ideas or have any suggestions by all means let me know.  Our plan is start this quite soon; probably by the end of February if possible.