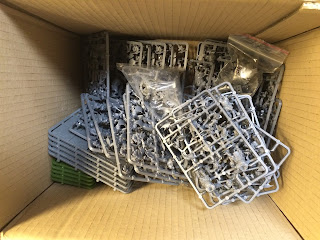 So I’ve finally received my Orc Mega Army box that I ordered from Mantic.  Now, don’t read too far into that “finally” part.  I ordered it at the end of September and considering it has to cross the ocean I didn’t expect it until the end of October which is roughly when I got it; about a 25 day turnaround, which didn’t bother me very much.  What bothered me the most was that the trolls in the army box and the 2nd box of trolls I’d ordered separately were not included and simply annotated as ‘To Follow’.  I was displeased.  If they weren’t’ in stock, then Mantic should have noted that on the website.  If you’re going to tell me something like ‘To Follow’ then you really ought to give me a ETA for when I can expect to receive them.  Still, ignoring all that nonsense I was quite excited to start working on the models. 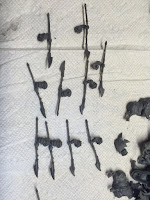 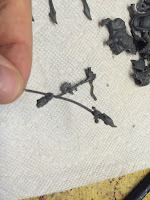 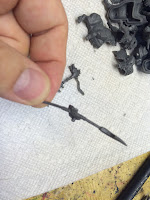 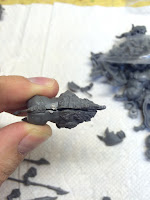 Now, I was pleased that I got the Mantic Points for my army box but the models were not in the army box.  Instead the sprues were loose in the box and the units that weren’t hard plastic on sprue were bagged separately and everything was stuffed together with copious amounts of packing peanuts.  Hard plastic models look great and I’m thrilled.  The other stuff though…  My god, Res-Tec should be banned.  Having been packaged the way it was, shipped overseas and subjected to possible prolonged periods of hot, cold then hot and more cold the long, thin and spindly pieces are quite warped.  Hell, even pieces that weren’t thin were warped. 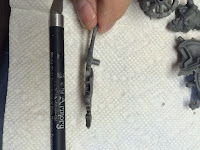 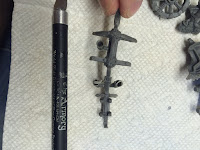 Now, this is annoying just because it is, but it’s also easy to fix.  Boil some water, drop in parts, remove and reshape and dip in cold water.  Voila, fixed!  Also though, the mold lines are bad on these and difficult to get cleaned up.  Now, I don’t know if Res-Tec is cheaper or supposedly better at getting detail and I really don’t care.  What I do know, is that cleaning it is a much larger hassle than I like.  Get rid of Res-Tec!  I guess in the end this post is just a bit of a rant.
I really like Mantic and what they are doing for the hobby right now, but a spade is a spade and I’ve got complaints.  Bad mold lines, bad choice of material, bad that I didn’t get the entire product that I paid for and was listed as ‘in stock’.  Now, reshaping the models isn’t impossible (or difficult even), but it does take extra time.  Cleaning the models mold lines also isn’t impossible, but again is time sucking.  Hopefully mantic eventually pulls out of the Res-Tec material and can switch to full on plastic because the plastic models I have look great.  They are easy to clean and good looking so I have no complaints about them.  Just felt it had to be said.
Blog