So with the release of Fortress Europe we've officially hit the Late War period for Flames Version 4.  As such I've been excitedly looking into Late War and what I can do with my collection.  Luckily I'd had the Open Fire set from the previous edition and the US Armored Rifle Platoons I have can easily transfer into Late War among the other units.  This sets me up quite easily for a Market Garden army using all my British Sherman V's.  Lucky me I won one of the D-Day US books that comes out in July, but looking at Fortress Europe I wanted to play a game!  We're going to do 109 points British VS Germans playing a narrative Market Garden game. 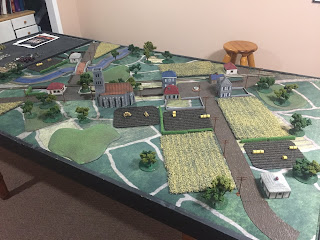 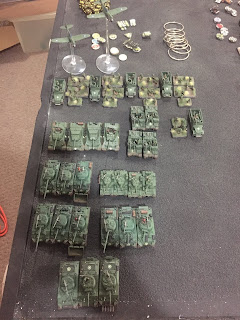 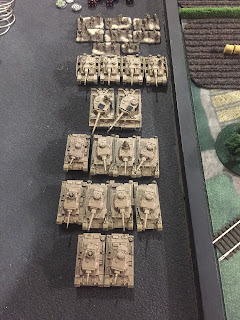 The game.  Doing a narrative bit like this requires some things that don't make sense.  For this specific game although the lists were built at 109 points we gave the British a free set of Kittyhawk Fighters because of the air superiority that the Allies were pushing at this point.  We also didn't decide the scenario in any kind of random way but simply chose to play No Retreat with Germans as Defenders.  We thought it would portray the fact that the British and Americans had pushed far into Holland and the German randomly pulling units to plug holes.

Here you can see that because of Deep Reserves the Germans are only starting with their small Grenadier Company and the StuG platoon on the board.  Now Deep Reserves simply says that no more than 1 unit with Front Armor 3 can start on the table, so the Tigers started in Ambush, not on table, but also not in Reserve. 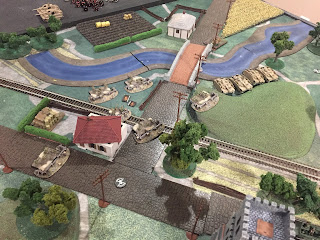 The British and their US Allies started on the Highway to Hell.  Well, mostly.  The Armored Rifles formed the forward force with the entirety of the Sherman column behind.  Opposite them running a different angle are the Stuarts and the M10's and in between are the Priests sitting in a field to provide fire support. 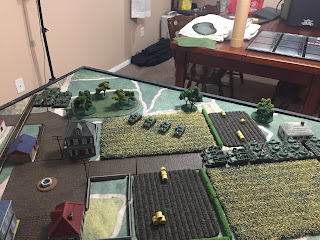 Turn one showed that, apparently the Air Force wasn't ready to support while the Priests dropped smoke across the hill to block the StuG's and then everything slammed forward as fast as they could possibly go with Dash moves getting forward quickly, making that daring push. 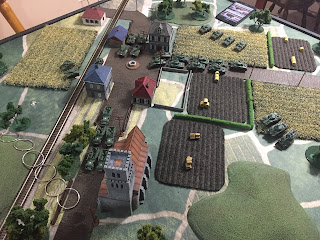 The Germans found a bit of luck from the start pulling in one of their Panzer Platoons.  The StuG's however, being blocked by smoke chose to hold steady behind their excellent firing hill until turn 2.  The Tigers ambushed out behind a hill and then promptly failed a Blitz order.  That done, one crawled to the edge of the hill to take a single shot at the Shermans who had decided to ignore the road and head across the farm field but missed.  The Panzers however threw some shots down the main road bailing the Armored Rifles HQ Half-Track and killing another leaving a Rifle Team dead and the 60mm Mortar and a Bazooka stranded. 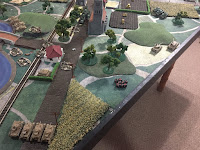 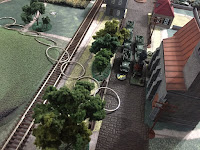 The air support continued to deny the Brit high command and the Sherman's began to split up through farm fields, over hills and railroad tracks.  The Stuarts made a dash to try and get some shots on the StuG's but one remained stuck on the tracks.  Two of the Achilles also bogged down crossing the railroad while two made their way in support of the Stuarts into the farm field.  The Armored Rifles bailed from their vehicles and garrisoned the nearby church.  All the fire I put in this turn however was for naught, though the Sherman's on the hill did manage to bail a Tiger and the Firefly hit but the dastardly Germans rolled a 6 bouncing the high velocity shot. 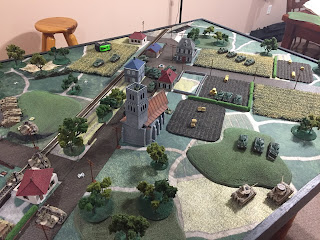 The Germans received yet more Reserves with another Panzer Platoon to reinforce their left flank near the bridge.  The StuG's failed a Blitz up the hill but still opted to go up for a firing position on the Achilles.  The Panzers fired and bailed the lead Stuart while killing another.  The Tiger remounted and they proceeded to kill the Firefly and a comrade.  The Panzers occupying the main road moved forward and threw more fire down the street but failed to hurt anyone, the one shell hitting bouncing off a Sherman.  All of the German infantry finally opened up, putting all possible fire into the church and although the stone kept the Armored Rifles safe, they were very much pinned. 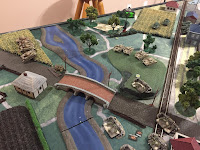 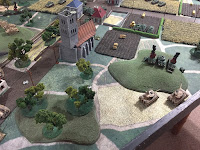 A brutal turn of events for the Germans, the Achilles wiped all 4 StuG's off the hill.  The Stuarts who had zipped around to get rear shots on the StuG's now found themselves without real targets and sitting ducks for the Panzers across the stream.  The remaining Sherman facing off against the Tigers willfully threw caution to the wind driving behind a Tiger for a valiant but feutile attempt at the rear.  The other Sherman's moved up the road and continued firing while a number of tanks remained bogged on the railroad tracks.  The Kittyhawks showed up and along with Artillery called in from the Armored Rifles they bombarded the German lines, but did nothing in the end. 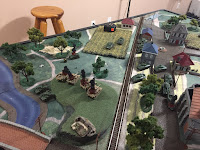 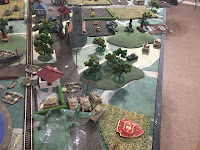 The Tigers annoyed drove onto the hill, yet again failing a Blitz check, but still managed to kill one of the Sherman's on the other side.  The center Panzers moved into the wood to gain concealment, yet still maintain a line on the main roadway.  The left flank Panzers remained motionless in their wheat field and managed to knock over an Achilles and Bail another.  The last unit of Panzers also arrived from reserves putting the full German army onto the table. 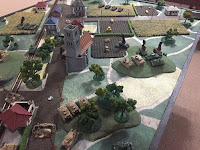 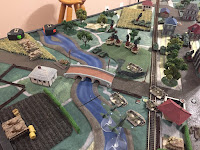 The Sherman's drove to the side of the Tigers hoping against hope for some hits which were not to come while the center road Sherman's crossed a fence line to move in on the Panzers under cover.  The Achilles lined up in the field and began throwing shells in exchange with the Germans left flank Panzers killing the Panzer III.  The air power finally showed but didn't kill while the Armored Rifles pinned down the Grenadiers.  The Artillery now zeroed in on the hapless Grenadiers as well, but again, couldn't kill.

The Tigers split, one remained to kill the Shermans (which it did) while the other moved off the hill to engage the ones on the roadway bailing one.  Otherwise the turn was just futile fire around the board hitting things but not penetrating or killing anyone. 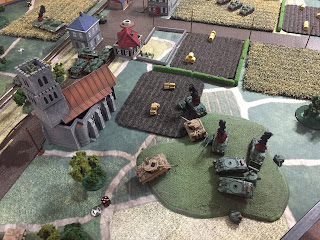 The Sherman's on the roadway with the remount, moved forward to engage Panzers while the Stuart's made their way up the hill near the center and managed to assault the sMG34 HMG there attempting to assist the Sherman's on getting to the objective that direction.  The single Sherman from an earlier platoon sat still on the board 3 turns later exchanging fire with a Panzer that just couldn't find his way into the woods, but neither could kill each other.  The air power returned and managed to kill an MG/Rifle team. 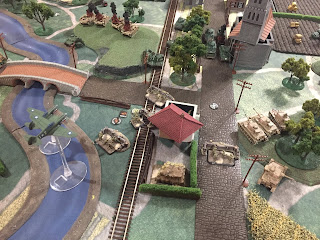 The Tigers came around the church and the Panzers in the woods combined fire bailing 2 Sherman's and killing another.  The Panzerschrek, now in range of the Stuarts took a potshot taking one out.  Market Garden was definitely in danger of falling at this point. 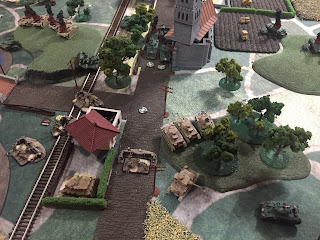 The single Stuart ran away while only one of the Sherman's got back into his tank meaning that my Formation was down to only the HQ unit in Good Spirits which broke the British back.  Marget Garden had indeed again failed.

Afterthoughts:
It was a fun game on a great table.  Again, for sure, one of my favorite things, if not my favorite, is the beauty that can be a Flames of War table.  Unlike many other miniature games which can look too busy, a well laid out Flames table just looks beautiful.  It was a lot of fun to take out the Fortress Europe book for a spin.  I've never actually played my British before and I usually just use the Sherman's as US 75's, but the Firefly is a neat tank.  Sadly being on the move most of the time and only being able to Blitz on a 4+ meant that I didn't get to put out nearly as many shots as I wanted.  I suppose I should've left them back behind fences and just lobbed long range shots, but oh well.  The German reserves showed up quickly and consistently which didn't help much I think, but I apparently should've been much more aggressive.  The game was definitely a lot of fun.
Blog FoW