Dispossessed in Age of Sigmar 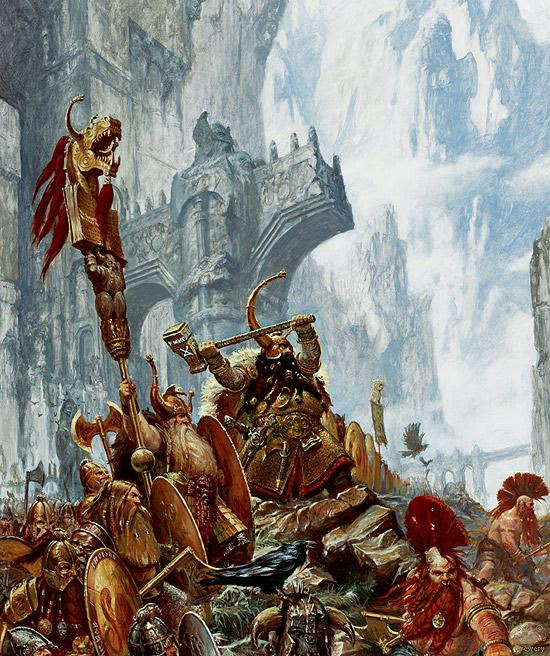 Well, since I’m currently recording episodes talking about the Dispossessed it only makes sense that at some point I’d throw my thoughts down in writing.  At the time of writing this blog post I’ve posted the first show talking about the key units from the army, which is to say, those that contain the Dispossessed keyword.  I don’t plan on going over my show here in words so I’ll just do a super quick rundown of the units and thoughts.

Runesmith – Secondary, +2 to dispel, prayers for rend and extra chance to stop wounds, always want 1, usually 2 as you’ll be throwing the pickaxe item on this guy to teleport him and a company of something across the field

Warriors – Cheap as chips, you either horde them up to sit on objectives or go MSU to toss as enemy interceptors to keep your shooting units out of combat for a turn or two more while you shoot

Longbeards – Warriors, but a little pricier and with better all-around stats

Ironbreakers – Really expensive warriors who don’t die for diddly, also very good at hording onto an objective as they can be quite tough to shift

Hammerers – Hammer things, really, it’s what they do, but a little fragile so make sure they aren’t targeted before they get to combat

Thunderers – Mob them up for +1 to hit, I prefer quarrelers for the extra shooting and better hand to hand skill

Irondrakes – Butter for your bread? These are the best shooting unit you have hands down, not only are there to hit, wound and rend better than those above, but they get the double shot at a smaller unit size, they are however the most expensive thing in the army

Sadly, that’s the army.  See, when Age of Sigmar came out in its original incarnation they split up all our war machines for lord only knows what reason, but they’re missing.  My second episode talking about Dwarfs will be covering those units.  Even then, some more of our stuff is in the compendium still (Miners, Slayers, Stone Thrower and a few others) which makes me sad because where Dwarfs suffer is the movement phase and Miners would be a serious boon to this army and in my opinion they need to make their way back in to help keep the Dispossessed relevant and able to compete.
Primarily I’m going to focus on the lists I’ve fielded in the past here.  I’m currently gearing up to re-design my list and go on with trying something vastly different, well, not vastly, but different.  My usual list is below:

Before you continue down my thoughts on this list it was my primary list before the Dwarfs had their old battalion from the PDF’s invalidated.  I would run it as Order allegiance and the battalion would give me the re-roll 1’s and 1-3 ignore battleshock.  It seems most tournaments are no longer allowing the old battalion’s, so now I’m being forced to use the dispossessed allegiance for those abilities which means no more using the Hurricanum, as sad as that makes me because it was great.

I bought 10 Irondrakes back in 8th Edition WHFB when End Times was running, but never bought more and wasn’t going to start now.  Besides, as I learned my 30 Quarrelers were quite often plenty to smash things that needed smashed apart.  One Runemsith and usually the Warden King hang around this group giving buffs to rend and wound.  The Hurricanum was an addition in the last year or so as it’s general +1 to hit buff for Order units made those Quarrelers even better, not to mention gave me access to magic casting as well as dispelling, plus I tore up my old Anvil of Doom and got to turn him into a big cool centerpiece model.  The Warriors and Longbeards I used more as screens, though that isn’t an optimal use for my Longbeards, I just never really got them to fit into my plans properly.  The Ironbreakers were a solid objective holder and if the King and Hurricanum were nearby they could dish out combat power too with their 2 attacks.  The Hammerers were often amazing as again, with the King and Hurricanum buffing these guys turned into murder machines hitting and wounding on 2’s with 2 attacks often meant that if they got to you, you were dead.  It gave the army another big target than just the Quarrelers who were often the first thing focused on because shooting.  My opponents would often let the Hammerers slide for a bit while attempting to throw things around and outmaneuver me to get to objectives and then when the Hammers went in, they went in fiercely.

Even though I’ve won plenty of games with this list I’ve never managed better than 3/2 in a 5-game environment and I’m wanting to push for that 4/1 result sometime which means a redesign is needed.  The list served well, but like I said a bit earlier, with most tournaments no longer allowing the old PDF battalion I’m being forced to give it a shift and a change, and even I’m not 100% sure where I’ll end up.  Keep an eye on the blog and the podcasts to see where I end up, but I will admit I am excited to get back to my Dwarfs.  Especially as recently there has been an awful lot of scuttlebutt on the web about them maybe getting a book.  One can only hope.
AoS Blog